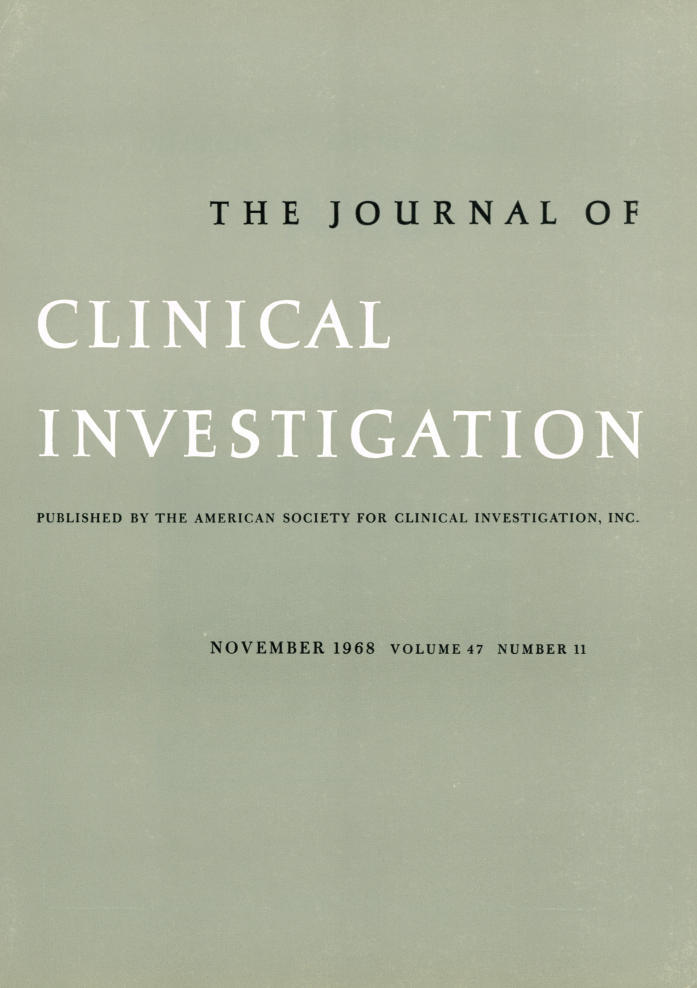 Aldosterone metabolism has been shown to be altered in pregnancy. The increased conversion of intravenously administered aldosterone-3H to the acid-labile conjugate in the urine (aldosterone 18-glucuronide) has again been observed. The urinary yield of intravenously administered aldosterone-3H as aldosterone 18-glucuronide in 16 pregnant subjects of 13.4±0.9 (SE)% was significantly higher (P 0.001) than in 11 nonpregnant subjects (seven males and four females) of 7.3±0.5 (SE)%.

The fixation of the first component of complement (C′1a) by human antibodies and human cells has been studied by the use of the C′1a fixation and transfer test (C′1a FT test) of Borsos and Rapp.

Eight plasma lipoprotein patterns currently employed in attempts to identify different forms of familial dyslipoproteinemia have been compared by two methods. The first (NIH method) is based on paper electrophoretic patterns produced by the four lipoprotein classes obtained by paper electrophoresis in albuminated buffer, coupled with the measurement of the total cholesterol of three of these lipoprotein classes and ascertainment of abnormal flotation of beta-migrating lipoproteins. The second (Donner method) is based on lipoprotein patterns obtained in the analytical ultracentrifuge, adapted for computer analysis and complemented by chemical determination of the concentration of chylomicrons (lipoproteins of Sf° > 400). Pooled samples representing patients with five types of familial hyperlipoproteinemia and three different forms of inherited lipoprotein dificiency were separately analyzed. For six of the eight pools, both methods provided a distinctive lipoprotein pattern in terms of changes in one or more variables. For the remaining two pools, type IV hyperlipoproteinemia and the heterozygote for Tangier disease, both methods provided identical but not unique patterns. The results indicate that lipoprotein analyses obtained by either method may be used interconvertibly in further genetic and other clinical studies.

Metabolism of adenosine 3′,5′-monophosphate by epithelial cells of the toad bladder

Metabolism of adenosine 3′,5′-monophosphate by epithelial cells of the toad bladder

When whole urinary bladders of the toad were incubated with adenosine 3′,5′-monophosphate-3H (cyclic AMP-3H) > 95% of the radioactivity could be extracted from the tissue with trichloroacetic acid (TCA). The TCA-soluble radioactivity was separable by cation-exchange (Dowex-50) chromatography into residual cyclic AMP-3H, 5′-AMP-3H, adenosine diphosphate (ADP)-3H and inosine-3H. Thus, neither substantial tight binding of cyclic AMP to TCA-precipitable cell constituents nor any novel metabolite of cyclic AMP were found.

In vivo metabolism of complement: I. Metabolism of the third component (C′3) in acquired hemolytic anemia

In vivo metabolism of complement: I. Metabolism of the third component (C′3) in acquired hemolytic anemia

The in vivo metabolism of purified third component of complement labeled with 125-iodine (C′3-125I) was studied in normal subjects and in patients with acquired hemolytic anemias. 27 such studies were performed; in addition, three studies were performed using C′3i, the biologically inactive reaction product of C′3.

The incorporation of tritiated thymidine into the deoxyribonucleic acid (DNA) of adipose fat and stromal cells was followed under a variety of conditions. After in vitro incubation of adipose slices or up to 2 days after in vivo injection of the isotope, all DNA radioactivity was in the stromal cell fraction. From 2 to 15 days after thymidine injection total tissue DNA radioactivity was constant, while between 2 and 5 days after injection label in fat cell DNA increased markedly. Thus new labeled fat cells, initially collected in the stromal pool, required 2-5 days after completion of DNA synthesis to accumulate sufficient lipid to be harvested in the fat cell fraction. Fasting before thymidine injection practically abolished DNA synthesis in primordial fat cells and reduced less drastically formation of stromal elements. However fasting sufficient to deplete lipid stores by 50% neither destroyed mature fat cells nor impaired their capacity to reaccumulate fat with refeeding. Other studies evaluated the role of new fat cell formation in the process of lipid accretion accompanying refeeding. These experiments indicated that at least during the early phase of rapid weight gain, accumulation of fat was due to deposition of triglyceride in existing cells rather than to accelerated formation of new fat cells. Studies with hypophysectomized rats demonstrated that pituitary ablation variably affected stromal DNA synthesis and nearly abolished the formation and (or) maturation of primordial fat cells. In these animals growth hormone markedly enhanced thymidine incorporation into stromal DNA but had no effect on fat cell precursors. In intact animals the predominant effect of growth hormone was also on the stromal fraction, although an action of the hormone of lesser magnitude on fat cell precursors was also evident.

Renal accumulation of salicylate and phenacetin: possible mechanisms in the nephropathy of analgesic abuse

Renal accumulation of salicylate and phenacetin: possible mechanisms in the nephropathy of analgesic abuse

Since either aspirin or phenacetin might be causative in the nephropathy of analgesic abuse, studies were designed to examine the renal accumulation and distribution of the major metabolic products of these compounds, salicylate and N-acetyl-p-aminophenol (APAP) respectively, in dogs. Nineteen hydropenic animals were studied, of which seven were given phenacetin, nine received acetyl salicylic acid, two were given both aspirin and phenacetin, and one received APAP directly. Two of three hydrated animals were given phenacetin and one was given aspirin. During peak blood levels of salicylate and (or) APAP, the kidneys were rapidly removed, frozen, sliced from cortex to papillary tip, and analyzed for water, urea, APAP, and salicylate.

Whole blood samples of patients with various forms of alpha thalassemia including hemoglobin H disease, alpha thalassemia trait, and the “silent carrier” state were incubated with leucine-14C for definition of relative rates of production of alpha and beta chains in these disorders. The chains were separated by carboxymethyl cellulose chromatography in the presence of 8 M urea and dithiothreitol. Their absorptions at 280 mμ were determined and their radioactivities measured in a liquid scintillation spectrometer. After correction for differences in extinction coefficients, the specific activities of the widely separated alpha and beta peaks were determined. In 11 nonthalassemic individuals, the alpha/beta specific activity ratios were found to be 1.02±0.07; in nine patients with alpha thalassemia trait, 0.77±0.05; in six patients with hemoglobin H disease, 0.41±0.11; and in four “silent carriers,” 0.88 with a range of 0.82-0.95. The results show that in peripheral blood, alpha chain production relative to beta chain production is indeed limited in the alpha thalassemia syndromes. Hemoglobin H disease results from doubly heterozygous inheritance of a gene resulting in moderate depression of alpha chain production (alpha thalassemia trait) and a gene resulting in very mild depression of alpha chain production (the “silent carrier” syndrome.”

Metabolism and rate of secretion of aldosterone in the bullfrog

Metabolism and rate of secretion of aldosterone in the bullfrog

A study of the metabolism of aldosterone in the bullfrog was undertaken to provide a measurable metabolite for the indirect isotope dilution technique for measuring secretory rates. The rate of excretion of labeled aldosterone was considerably slower in the frog than in man and made necessary the collection of excretory products for 5 days to insure reasonably complete recovery of metabolites. The major identifiable metabolite was a tetrahydro derivative subsequently identified as 3β-hydroxy-5β-tetrahydroaldosterone. This metabolite was excreted partly in the free form and partly as a glucuronic acid conjugate. The pH 1-hydrolyzable conjugate of aldosterone was not detected.

Solubilized protein derived from human platelets was fractionated by DEAE cellulose column chromatography and analyzed for protease activity using three substrates: denatured bovine hemoglobin, alpha casein, and purified plasminogen-free human fibrinogen. A protein fraction was found with proteolytic activity which was heat labile and not attributable to plasmin. The activity was not potentiated by cysteine or inhibited by iodoacetamide. Studies of pH optima indicated a broad range of enzyme activity with peaks in both the acid and alkaline region. Cathepsin A activity was detected in the platelet protease fraction by hydrolysis of the synthetic substrate N-carbobenzoxy-α-L-glutamyl-L-tyrosine. Similar proteolytic activity was found when the proteins derived from isolated platelet granules were examined. The results indicate that human platelets possess potent intracellular proteolytic enzymes. The relationship of this proteolytic activity to the hemostatic process is discussed.