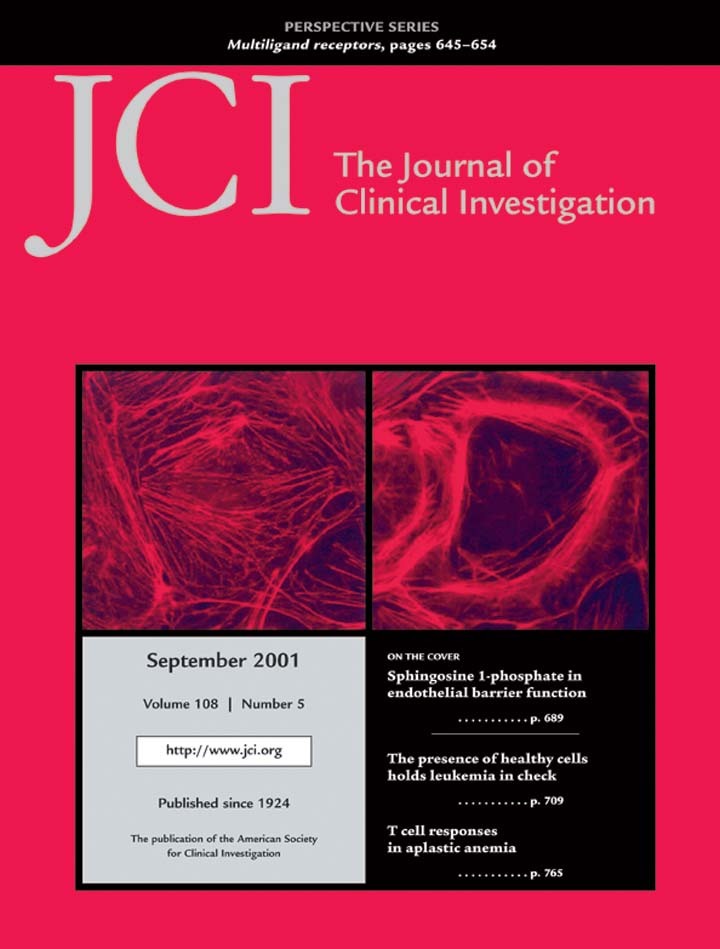 The experimental use of antisense oligonucleotides: a guide for the perplexed

The experimental use of antisense oligonucleotides: a guide for the perplexed

Is the class A macrophage scavenger receptor (SR-A) multifunctional? — The mouse’s tale

Is the class A macrophage scavenger receptor (SR-A) multifunctional? — The mouse’s tale

An experiment of nature: genetic l-arginine deficiency and NO insufficiency

An experiment of nature: genetic l-arginine deficiency and NO insufficiency

Antigen-specific cancer immunotherapy and antiangiogenesis have emerged as two attractive strategies for cancer treatment. An innovative approach that combines both mechanisms will likely generate the most potent antitumor effect. We tested this approach using calreticulin (CRT), which has demonstrated the ability to enhance MHC class I presentation and exhibit an antiangiogenic effect. We explored the linkage of CRT to a model tumor antigen, human papilloma virus type-16 (HPV-16) E7, for the development of a DNA vaccine. We found that C57BL/6 mice vaccinated intradermally with CRT/E7 DNA exhibited a dramatic increase in E7-specific CD8+ T cell precursors and an impressive antitumor effect against E7-expressing tumors compared with mice vaccinated with wild-type E7 DNA or CRT DNA. Vaccination of CD4/CD8 double-depleted C57BL/6 mice and immunocompromised (BALB/c nu/nu) mice with CRT/E7 DNA or CRT DNA generated significant reduction of lung tumor nodules compared with wild-type E7 DNA, suggesting that antiangiogenesis may have contributed to the antitumor effect. Examination of microvessel density in lung tumor nodules and an in vivo angiogenesis assay further confirmed the antiangiogenic effect generated by CRT/E7 and CRT. Thus, cancer therapy using CRT linked to a tumor antigen holds promise for treating tumors by combining antigen-specific immunotherapy and antiangiogenesis.

Fractalkine (Fk) is a structurally unusual member of the chemokine family. To determine its role in vivo, we generated mice with a targeted disruption of CX3CR1, the receptor for Fk. CX3CR1–/– mice were phenotypically indistinguishable from wild-type mice in a pathogen-free environment. In response to antibody-induced glomerulonephritis, CX3CR1–/– and CX3CR1+/+ mice had similar levels of proteinuria and injury. CX3CR1–/– and CX3CR1+/+ mice also developed similar levels of disease in myelin oligodendrocyte glycoprotein-induced experimental autoimmune encephalomyelitis. We performed heterotopic MHC class I/II cardiac transplants from BALB/c mice into C57BL/6 mice. In the absence of cyclosporin A (CsA), there was no difference in graft survival time between CX3CR1–/– and CX3CR1+/+ recipient mice. However, in the presence of subtherapeutic levels of CsA, graft survival time was significantly increased in the CX3CR1–/– mice. Characterization of cells infiltrating the grafts revealed a selective reduction in natural killer cells in the CX3CR1–/– recipients in the absence of CsA and a reduction in macrophages, natural killer cells, and other leukocytes in the presence of CsA. We conclude that Fk plays an important role in graft rejection. The development of CX3CR1 antagonists may allow reductions in the doses of immunosuppressive drugs used in transplantation.

Transmissible spongiform encephalopathies display long incubation periods at the beginning of which the titer of infectious agents (prions) increases in peripheral lymphoid organs. This “replication” leads to a progressive invasion of the CNS. Follicular dendritic cells appear to support prion replication in lymphoid follicles. However, the subsequent steps of neuroinvasion remain obscure. CD11c+ dendritic cells, an unrelated cell type, are candidate vectors for prion propagation. We found a high infectivity titer in splenic dendritic cells from prion-infected mice, suggesting that dendritic cells carry infection. To test this hypothesis, we injected RAG-10/0 mice intravenously with live spleen cell subsets from scrapie-infected donors. Injection of infected dendritic cells induced scrapie without accumulation of prions in the spleen. These results suggest that CD11c+ dendritic cells can propagate prions from the periphery to the CNS in the absence of any additional lymphoid element.

Quantitative effects of Nf1 inactivation on in vivo hematopoiesis

Quantitative effects of Nf1 inactivation on in vivo hematopoiesis

The NF1 tumor-suppressor gene is frequently inactivated in juvenile myelomonocytic leukemia, and Nf1 mutant mice model this myeloproliferative disorder (MPD). Competitive repopulation assays were performed to quantify the proliferative advantage of Nf1–/– hematopoietic cells in vivo. Nf1 mutant stem cells demonstrated a growth advantage that was greatest in myeloid lineage cells and least pronounced in T lymphocytes. Surprisingly, although low numbers of Nf1-deficient cells consistently outcompeted wild-type cells, levels of chimerism were stable over months of observation, and MPD was not observed unless threshold numbers of mutant cells were injected. These data showing that normal competitor cells can strongly modulate the growth of mutant populations in vivo have general implications for modeling cancer in the mouse. In particular, strains in which cancer-associated mutations are expressed in fields of target cells may not accurately model early events in tumorigenesis because they eliminate the requirement for a mutant clone to outcompete resident normal cells.

Although L-arginine is the only substrate for nitric oxide (NO) production, no studies have yet been reported on the effect of an L-arginine deficiency on vascular function in humans. Lysinuric protein intolerance (LPI) is a rare autosomal recessive defect of dibasic amino acid transport caused by mutations in the SLC7A7 gene, resulting in an L-arginine deficiency. Vascular endothelial function was examined in an LPI patient who was shown to be a compound heterozygote for two mutations in the gene (5.3-kbp Alu-mediated deletion, IVS3+1G→Α). The lumen diameter of the brachial artery was measured in this patient and in healthy controls at rest, during reactive hyperemia (endothelium-dependent vasodilation [EDV]), and after sublingual nitroglycerin administration (endothelium-independent vasodilation [EIV]) using ultrasonography. Both EDV and NOx concentrations were markedly reduced in the patient compared with those for the controls. They became normal after an L-arginine infusion. EIV was not significantly different between the patient and controls. Positron emission tomography of the heart and a treadmill test revealed ischemic changes in the patient, which were improved by the L-arginine infusion. Thus, in the LPI patient, L-arginine deficiency caused vascular endothelial dysfunction via a decrease in NO production.

The mechanism underlying the regulation of basal metabolic rate by thyroid hormone remains unclear. Although it has been suggested that thyroid hormone might uncouple substrate oxidation from ATP synthesis, there are no data from studies on humans to support this hypothesis. To examine this possibility, we used a novel combined 13C/31P nuclear magnetic resonance (NMR) approach to assess mitochondrial energy coupling in skeletal muscle of seven healthy adults before and after three days of triiodothyronine (T3) treatment. Rates of ATP synthesis and tricarboxylic acid (TCA) cycle fluxes were measured by 31P and 13C NMR spectroscopy, respectively, and mitochondrial energy coupling was assessed as the ratio. Muscle TCA cycle flux increased by approximately 70% following T3 treatment. In contrast, the rate of ATP synthesis remained unchanged. Given the disproportionate increase in TCA cycle flux compared with ATP synthesis, these data suggest that T3 promotes increased thermogenesis in part by promoting mitochondrial energy uncoupling in skeletal muscle.

Experimental autoimmune encephalomyelitis (EAE) is mediated by myelin-specific CD4+ T cells secreting Th1 cytokines, while recovery from disease is associated with expression of Th2 cytokines. Investigations into the role of individual cytokines in disease induction have yielded contradictory results. Here we used animals with targeted deletion of the STAT4 or STAT6 genes to determine the role of these signaling molecules in EAE. The STAT4 pathway controls the differentiation of cells into a Th1 phenotype, while the STAT6 pathway controls the differentiation of cells into a Th2 phenotype. We found that mice deficient in STAT4 are resistant to the induction of EAE, with minimal inflammatory infiltrates in the central nervous system. In contrast, STAT6-deficient mice, which have a predominantly Th1 phenotype, experience a more severe clinical course of EAE as compared with wild-type or STAT4 knockout mice. In addition, adoptive transfer studies confirm the regulatory functions of a Th2 environment in vivo. These novel data indicate that STAT4 and STAT6 genes play a critical role in regulating the autoimmune response in EAE.

We studied the distribution of 5-hydroxytryptamine– (5-HT-) containing cells in the guinea pig pancreas and examined the effects of 5-HT on fluid secretion by interlobular pancreatic ducts. The 5-HT–immunoreactive cells with morphological characteristics of enterochromaffin (EC) cells were scattered throughout the duct system and were enriched in islets of Langerhans. The fluid secretory rate in the isolated interlobular ducts was measured by videomicroscopy. Basolateral applications of 5-HT strongly but reversibly reduced HCO3-dependent, as well as secretin- and acetylcholine- (ACh-) stimulated, fluid secretion, whereas 5-HT applied into the lumen had no such effects. Secretin-stimulated fluid secretion could be inhibited by a 5-HT3 receptor agonist, but not by agonists of the 5-HT1, 5-HT2, or 5-HT4 receptors. Under the stimulation with secretin, 5-HT decreased the intracellular pH (pHi) and reduced the rate of pHi recovery after acid loading with NH4+, suggesting that 5-HT inhibits the intracellular accumulation of HCO3–. The elevation of intraductal pressure in vivo reduced secretin-stimulated fluid secretion, an effect that could be attenuated by a 5-HT3 receptor antagonist. Thus, 5-HT, acting through basolateral 5-HT3 receptors, strongly inhibits spontaneous, secretin-, and ACh-stimulated fluid secretion by guinea pig pancreatic ducts. 5-HT released from pancreatic ductal EC cells on elevation of the intraductal pressure may regulate fluid secretion of neighboring duct cells in a paracrine fashion.

Failure of CD4+ T cells to proliferate in response to antigenic stimulation is a characteristic of HIV infection. Analysis of the proliferation defect has been hampered by an inability to identify CD4+ cells with T cell receptor specificity for antigen. To focus only on cells that had been stimulated through the T cell receptor, CD4+ T cells were stimulated with an anti-Vβ3 Ab that activates approximately 3–5% of peripheral blood T cells. This approach revealed proliferation defects in cells from HIV-infected patients that were not appreciated using anti-CD3 Ab stimulation and provided the capacity to examine responses on a single cell basis. After anti-Vβ3 Ab stimulation, CD4+Vβ3+ cells from HIV-infected patients demonstrated defects in expression of cell cycle–associated proteins, D-type cyclins, and cyclin A. However, the expression of early activation markers, CD69 and CD25, was not significantly impaired in cells from most patients. Thus, CD4+ T cell proliferation failure in HIV disease is characterized by dysregulated activation that precludes cell cycle progression. This proliferation defect was most apparent in patients with diminished CD4+ T cell numbers and higher plasma HIV RNA levels. CD4+ T cell proliferation failure may be a key determinant of immune impairment in HIV disease.

Immune mediation of aplastic anemia (AA) has been inferred from clinical responsiveness to immunosuppressive therapies and a large body of circumstantial laboratory evidence. However, neither the immune response nor the nature of the antigens recognized has been well characterized. We established a large number of CD4 and CD8 T cell clones from a patient with AA and analyzed their T cell receptor (TCR) usage. Most CD4 clones displayed BV5, whereas most CD8 clones displayed BV13. We found sequence identity for complementarity determining region 3 (CDR3) among a majority of CD4 clones; the same sequence was present in marrow lymphocytes from four other patients with AA but was not detected in controls. The dominant CD4 clone showed a Th1 secretion pattern, lysed autologous CD34 cells, and inhibited their hematopoietic colony formation. In three of four patients, successful immunosuppressive treatment led to marked decrease in clones bearing the dominant CDR3 BV5 sequence. These results suggest surprisingly limited heterogeneity of the T cell repertoire in an individual patient and similarity at the molecular level of the likely pathological lymphocyte response among multiple patients with AA, consistent with recognition of limited numbers of antigens shared by individuals with the same HLA type in this disease.