Ciliopathies are clinically overlapping genetic disorders involving structural and functional abnormalities of cilia. Currently, there are no small-molecule drugs available to treat ciliary defects in ciliopathies. Our phenotype-based screen identified the flavonoid eupatilin and its analogs as lead compounds for developing ciliopathy medication. CEP290, a gene mutated in several ciliopathies, encodes a protein that forms a complex with NPHP5 to support the function of the ciliary transition zone. Eupatilin relieved ciliogenesis and ciliary receptor delivery defects resulting from deletion of CEP290. In rd16 mice harboring a blinding Cep290 in-frame deletion, eupatilin treatment improved both opsin transport to the photoreceptor outer segment and electrophysiological responses of the retina to light stimulation. The rescue effect was due to eupatilin-mediated inhibition of calmodulin binding to NPHP5, which promoted NPHP5 recruitment to the ciliary base. Our results suggest that deficiency of a ciliopathy protein could be mitigated by small-molecule compounds that target other ciliary components that interact with the ciliopathy protein. 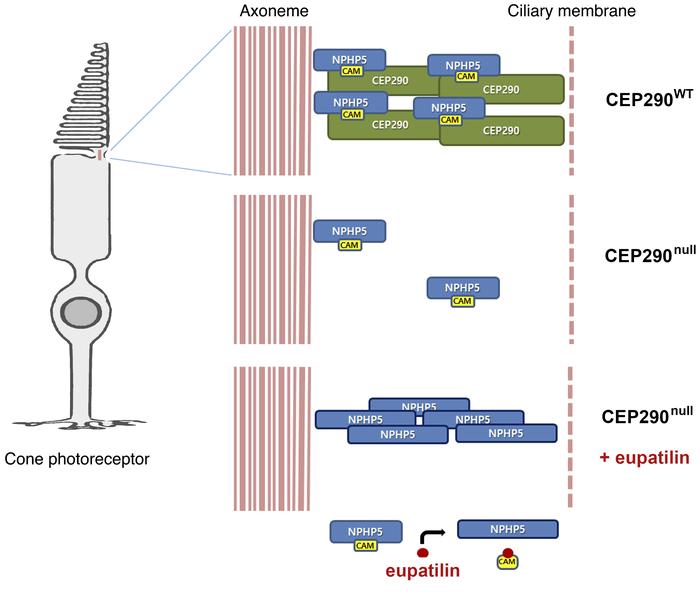 Mutations in a number of genes required for the formation or function of primary cilia have been identified in ciliopathies, such as Joubert syndrome, Meckel-Gruber syndrome, and nephronophthisis (1). In addition, ciliopathy mutations interfering with opsin trafficking through the connecting cilium of photoreceptors account for a significant proportion of hereditary retinal dystrophies, including Leber congenital amaurosis (LCA) (2, 3). Protein products of genes mutated in these ciliopathies commonly act as a component or an interactor of transition zone complexes that form a barrier structure at the ciliary base to control transit of molecules into and out of the cilium (4).

Although individual ciliopathies are rare genetic disorders, collectively, the prevalence of ciliopathies may reach 1 in 1,000 births (5). Currently, there are no approved medications available for the treatment of most ciliopathies. CEP290 is a gene frequently mutated in several ciliopathies and LCA (6). CEP290 gene augmentation therapy using viral vectors has been shown to ameliorate LCA-related phenotypes in human cell and mouse models (7, 8). Oligonucleotide-mediated splicing correction has also been shown to rescue LCA phenotypes in the induced pluripotent stem cell–derived optic cups of patients harboring a CEP290 intronic mutation (9). In this study, we aimed to identify lead compounds for the treatment of CEP290-related ciliopathies through cell-based compound library screening.

We screened a library of 2,789 synthetic and natural compounds and identified 22 compounds that increased the number of ciliated cells in the CEP290null context (Figure 1B, Supplemental Table 1, and Supplemental Figure 2). The compounds showing the strongest rescue effect were 4 structural analogs of plant flavonoids: eupatilin, jaceosidin, lysionotin, and quercetin. They share the core molecular structure of a 15-carbon skeleton, which consists of 2 phenyl rings and a heterocyclic ring (Figure 1C). The rescue effect of the flavonoids was compared by a dose-response analysis, and eupatilin was selected for further analyses (Figure 1D). To determine whether eupatilin could exert a general rescue effect on the loss of ciliopathy proteins, we treated CEP290WT RPE1 cells with eupatilin after siRNA-mediated knock down of several ciliopathy genes (4, 11, 12). Serum starvation–induced ciliogenesis was not rescued by eupatilin in cells depleted of the selected ciliopathy genes, whereas eupatilin facilitated ciliogenesis in cells transfected with negative control siRNA (Figure 1E). This suggests that although eupatilin can promote ciliogenesis in a CEP290WT context, the rescue effect of eupatilin is specific for CEP290 loss.

Actin filament destabilizer cytochalasin D (cytoD) has been shown to alleviate ciliogenesis defects in Ift88 mutant embryonic fibroblasts and induce ciliogenesis in RPE1 cells even without serum starvation (13). Unlike cytoD, eupatilin treatment did not induce ciliogenesis in the presence of serum (Figure 1F) and did not alter the structure of the actin cytoskeleton (Supplemental Figure 3A). Moreover, Ki67 expression and YAP nuclear enrichment, which reflect cell proliferation and cilium disassembly gene expression (14), respectively, were only affected by cytoD treatment (Supplemental Figure 3, B–D). Cell proliferation assay validated that eupatilin exerts a lower inhibitory effect on cell proliferation when compared with cytoD (Supplemental Figure 3E). These results suggest that eupatilin and cytoD use different mechanisms to influence the assembly of primary cilia.

Next, we investigated whether known properties of eupatilin were involved in its rescue effect. Eupatilin has been shown to inhibit the PI3K/AKT signaling pathway and activate peroxisome proliferator-activated receptor alpha (PPAR-α) (15, 16). We treated CEP290null cells with the PI3K inhibitor BYL-719, the AKT inhibitor MK-2206, and the PPAR-α agonist WY-14643, either alone or together with eupatilin. These compounds did not promote ciliogenesis and the rescue effect of eupatilin was not changed (Supplemental Figure 4). Therefore, eupatilin does not appear to act through PI3K/AKT and PPAR-α to rescue ciliogenesis defects.

A small number of CEP290null cells formed primary cilia positive for the ciliary markers poly-glutamylated tubulin and ARL13B (Supplemental Figure 1E). However, cilia in the mutant cells exhibited a significant decrease in Smo-EGFP fluorescence intensity when compared with cilia from CEP290WT cells (Figure 2, A and B). Notably, eupatilin treatment significantly enhanced the intensity of ciliary Smo-EGFP fluorescence and slightly increased ciliary length in CEP290null cells (Figure 2, C–E). By contrast, cytoD did not affect ciliary Smo-EGFP intensity and showed a stronger cilium elongation effect. Combined treatment with eupatilin and cytoD exerted a synergistic effect on cilium elongation, and a subset of elongated cilia exhibited abnormal bulges (Figure 2D). CEP290 has been reported to play a role in the establishment of the ciliary transition zone and the delivery of membranous cargos across the transition zone (20, 21). Thus, our results suggest that eupatilin improves the function of the transition zone damaged by CEP290 loss.

Eupatilin promotes Smo-EGFP transport to the ciliary membrane. (A) Fluorescence micrographs visualizing ciliary Smo-EGFP intensity in CEP290WT and CEP290null RPE1 cells. (B) Quantification (arbitrary unit) of the experiment presented in A. (C) Effect of cytoD and eupatilin on ciliary Smo-EGFP intensity and cilium elongation in CEP290null RPE1 cells. Cells were treated with the indicated chemicals for 48 hours in the absence of serum. (D and E) Quantification (arbitrary unit) of the experiment presented in C. Scale bars indicate 5 μm. Error bars represent SEM (30–60 cells of each condition from 2 independent experiments were analyzed; **P <0.01, t test).

We tested whether eupatilin can rescue CEP290-related ciliopathy phenotypes in a mouse model. Homozygous rd16 mice harboring a Cep290 in-frame deletion have been shown to exhibit blindness due to complete degeneration of photoreceptors (22). We first confirmed that daily subcutaneous injection of eupatilin (0–40 mg/kg) did not interfere with body growth or the structure and electrophysiological function of the retina in CD1 mouse neonates (Supplemental Figure 7 and 8). Next, we injected eupatilin (40 mg/kg) daily into rd16 neonates for 3 weeks from 3 days after birth. As expected, electroretinograms (ERGs) under dark-adapted conditions (scotopic response) and light-adapted conditions (photopic response) indicated a severe deterioration of rod and cone function in vehicle-injected rd16 homozygotes at postnatal day 23. Remarkably, ERGs of eupatilin-injected rd16 homozygotes showed partial but significant recoveries under light-adapted conditions (Figure 3, A and B). ERGs under dark-adapted conditions were not changed by eupatilin (Supplemental Figure 9A). Consistent with the ERG findings, immunofluorescence analyses revealed that M-opsin trafficking to the outer segment of cone photoreceptors was significantly recovered, whereas rhodopsin trafficking was not rescued in eupatilin-treated rd16 mice (Figure 3, C and D; and Supplemental Figure 9B). These results demonstrate that eupatilin treatment improves the function of cone photoreceptors in Cep290-mutant retinas.

NPHP5 possesses distinct CEP290- and calmodulin-binding domains, and the calmodulin-binding domain is dispensable for the localization and function of NPHP5 (25). Previously, eupatilin analog quercetin was shown to interact with and antagonize the Ca2+-calmodulin complex (27). These findings prompted us to test whether eupatilin restored NPHP5 localization in a calmodulin-dependent manner. To test whether eupatilin interacts with calmodulin, we performed a drug affinity responsive target stability (DARTS) experiment (28, 29). Eupatilin treatment conferred protease resistance to calmodulin, indicating that there is a physical interaction between eupatilin and calmodulin (Figure 4C). In silico molecular docking analysis also suggested that eupatilin directly interacts with calmodulin (Supplemental Figure 12). Next, we examined whether eupatilin affects the binding affinity between NPHP5 and calmodulin. We performed a coimmunoprecipitation analysis of endogenous NPHP5. Notably, the presence of eupatilin decreased the amounts of calmodulin coprecipitated with NPHP5, whereas coprecipitation of IFT88 was not inhibited (Figure 4D). This shows that eupatilin inhibits the binding between NPHP5 and calmodulin. In addition, we observed an increase in the total level of NPHP5 in response to eupatilin treatment (Figure 4E).

We speculated that calmodulin inhibits the accumulation of NPHP5 at the transition zone in the absence of CEP290. To test this, we performed siRNA-mediated knock down of calmodulin genes. Simultaneous depletion of calmodulin 1, 2, and 3 improved ciliogenesis in CEP290null cells (Figure 4F). Moreover, calmodulin knockdown promoted the recruitment of NPHP5 to the transition zone (Figure 4G). The combination of eupatilin treatment and calmodulin knockdown additively increased ciliated cells and cilia length (Figure 4, H–J). Therefore, we conclude that eupatilin facilitates NPHP5 centrosomal localization in a CEP290null context by inhibiting the interaction between calmodulin and NPHP5 (Supplemental Figure 13). Augmented NPHP5 levels may ameliorate the transport of membrane proteins through the transition zone. Phenothiazine derivatives and cyclosporin A can function as a calmodulin inhibitor (30, 31), and our screen hits include cyclosporin A and the 2 phenothiazine derivatives acepromazine and methdilazine (Supplemental Table 1 and Supplemental Figure 14). These compounds may also compensate for the loss of CEP290 in a calmodulin-dependent manner.

Previous studies have reported early-onset rapid degeneration of rod photoreceptors in human ciliopathies caused by CEP290 or NPHP5 mutations (32, 33). In contrast to early rod losses, the fovea in these patients retained cone nuclei, although cone photoreceptors exhibited abnormal morphology of the inner and outer segments (32). Our finding that only cone photoreceptors responded to eupatilin treatment is consistent with the fact that cone photoreceptors are more slowly degenerated than rod photoreceptors (32, 34). Significant cone ERG responses were not detected in eupatilin-injected rd16 mice at P30 (not shown). Oxidative damage has been suggested as a major contributing factor to cone cell death following the death of rod cells (35). Thus, it is likely that the diminished effect of eupatilin at P30 was due to the secondary death of cone cells. Despite this limitation, considering that the fovea of the human retina primarily consists of cone photoreceptors, eupatilin may be used to preserve the central vision of CEP290-associated retinopathy patients.

In conclusion, we identify eupatilin as a lead compound for developing medication for ciliopathies involving retinal degeneration. Eupatilin has been used in clinic as a drug for gastritis and peptic ulcer (36). Therefore, we expect that eupatilin could be repositioned for treating ciliopathy patients carrying CEP290 mutations. Collectively, our study provides evidence that deficiency of a disease protein in recessive genetic disorders can be mitigated by chemical compounds that target other proteins that interact with the disease protein.

Study approval. Animal experiments were conducted in an animal facility at KAIST. The KAIST IACUC approved the animal care and experimental procedures used in this study (KA2017-20).

We thank Gou Young Koh for providing ERG equipment and Jaeryung Kim for technical support for ERG measurements. This study was supported by Korean Health Industry Development Institute grants (HI12C0014 and HI18C0013) funded by the Korean Ministry of Health and Welfare, Korean National Research Foundation grants (2015M3A9B6027820, 2015K1A1A2028365, 2015M3A9C4076321, and 2015M3A9B6027818) funded by the Korean Ministry of Science and ICT, and the Brain Korea 21Plus Project.

Conflict of interest: YK, SK, YJ, HK, and JK have filed a patent application in South Korea for ciliogenesis-promoting low-molecular-weight compounds and a therapeutic agent for ciliopathy (application number: 10-2017-0171656).