Overconsumption of fructose and other sugars has been linked to nonalcoholic fatty liver disease (NAFLD); however, the sugar-associated effects that lead to disease are poorly defined. In this issue of the JCI, Zhang and colleagues show that the carbohydrate response element–binding protein (ChREBP) coordinates an adaptive response to a high-fructose diet in mice and that loss of this transcription factor leads to hepatic inflammation and early signs of fibrosis. Intriguingly, ChREBP-dependent effects were due to an exaggerated activation of the proapoptotic arms of the endoplasmic reticulum stress response that is probably secondary to inappropriate derepression of cholesterol biosynthesis. These findings suggest that a previously unknown link exists between ChREBP and the regulation of cholesterol synthesis that affects liver injury.

ChREBP senses fructose to coordinate a protective response in the liver. 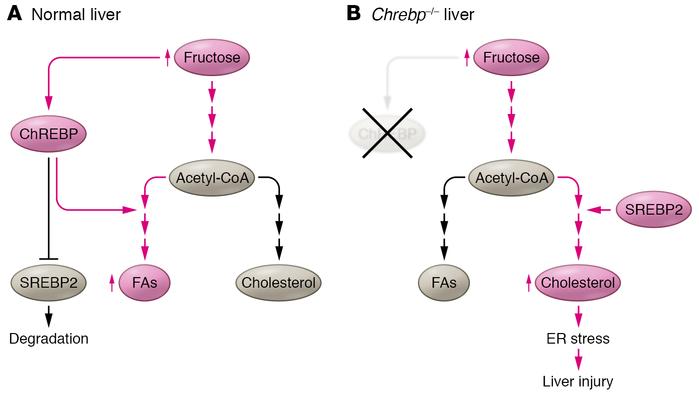 () Zhang et al. show that fructose-mediated activation of ChREBP in a normal liver results in increased DNL and promotes the degradation of SREBP2. This response is hepatoprotective, ultimately leading to an increase in hepatic triglyceride but no change in cholesterol levels. () On the other hand, mice lacking ChREBP do not accumulate excess triglycerides in their liver when fed a high-fructose diet. Because fatty acids and cholesterol share a common precursor, acetyl-CoA, carbon in fructose may flux toward cholesterol synthesis. Moreover, SREBP2 is activated in ChREBP-deficient hepatocytes to yield elevated hepatic cholesterol levels that predispose to maladaptive ER stress signaling, apoptosis, and hepatic injury.