Acute pancreatitis (AP), a human disease in which the pancreas digests itself, has substantial mortality with no specific therapy. The major causes of AP are alcohol abuse and gallstone complications, but it also occurs as an important side effect of the standard asparaginase-based therapy for childhood acute lymphoblastic leukemia. Previous investigations into the mechanisms underlying pancreatic acinar cell death induced by alcohol metabolites, bile acids, or asparaginase indicated that loss of intracellular ATP generation is an important factor. We now report that, in isolated mouse pancreatic acinar cells or cell clusters, removal of extracellular glucose had little effect on this ATP loss, suggesting that glucose metabolism was severely inhibited under these conditions. Surprisingly, we show that replacing glucose with galactose prevented or markedly reduced the loss of ATP and any subsequent necrosis. Addition of pyruvate had a similar protective effect. We also studied the effect of galactose in vivo in mouse models of AP induced either by a combination of fatty acids and ethanol or asparaginase. In both cases, galactose markedly reduced acinar necrosis and inflammation. Based on these data, we suggest that galactose feeding may be used to protect against AP. 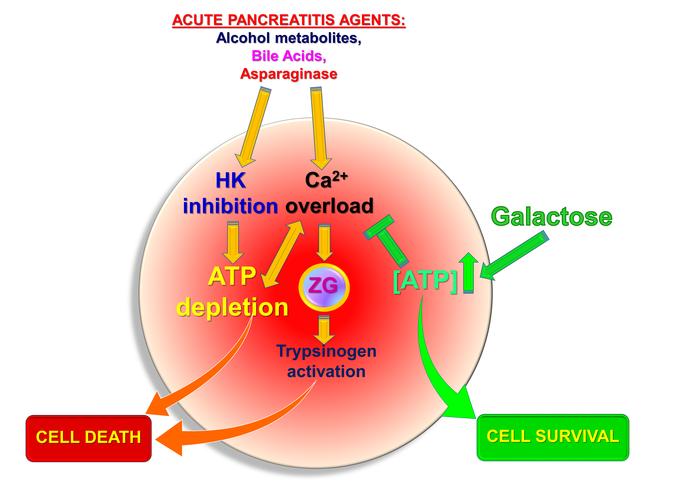