Type 1 diabetes (T1D) is a chronic autoimmune disease that causes severe loss of pancreatic β cells. Autoreactive T cells are key mediators of β cell destruction. Studies of organ donors with T1D that have examined T cells in pancreas, the diabetogenic insulitis lesion, and lymphoid tissues have revealed a broad repertoire of target antigens and T cell receptor (TCR) usage, with initial evidence of public TCR sequences that are shared by individuals with T1D. Neoepitopes derived from post-translational modifications of native antigens are emerging as novel targets that are more likely to evade self-tolerance. Further studies will determine whether T cell responses to neoepitopes are major disease drivers that could impact prediction, prevention, and therapy. This Review provides an overview of recent progress in our knowledge of autoreactive T cells that has emerged from experimental and clinical research as well as pathology investigations. 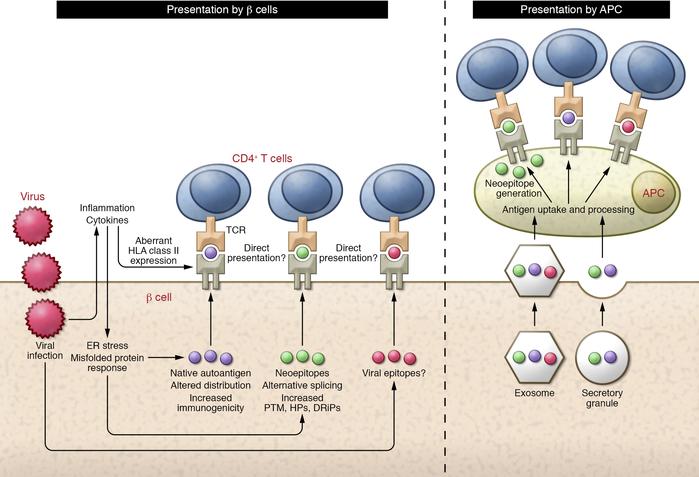 Schematic representation of major autoantigen classes that may be targeted by CD4+ T cells. Similar to CD8+ T cells, these may include native antigens and neoepitopes, which may be formed under conditions of β cell inflammation and stress. β Cells can produce several neoepitopes: for example, peptides originating from alternative splicing, insulin hybrid peptides (HP), and DRiP insulin peptides are reportedly produced in β cells (for DRiPs, the evidence is from studies of cell lines). Many autoantigens are secretory granule proteins, which may be released by β cells and acquired by APCs. Exosomes released by β cells also contain autoantigens. CD4+ T cells may react with antigens captured, processed, and presented by APCs in the pancreatic lymph node and in the islets. The B:9–23 epitope is produced in the secretory granules, captured, and presented by APCs, at least in the NOD mouse. The generation of neoepitopes in β cells further raises the question of whether the previously reported aberrant expression of HLA class II molecules by β cells might allow CD4+ T cells to recognize antigens on their surface directly.