Nonalcoholic fatty liver disease (NAFLD) is characterized by excess accumulation of fat in the liver. In some cases, NAFLD is also accompanied by insulin resistance, resulting in metabolic dysfunction. Dietary fat content probably influences both NAFLD and insulin resistance; however, the immediate effects of fat consumption have not been fully explored. In this issue of the , Hernández et al. evaluated hepatic glucose and lipid metabolism in humans and mice following a single oral dose of saturated fat. This one bolus of fat resulted in a measurable increase in insulin resistance, hepatic triglycerides, and gluconeogenesis. In mice, the saturated fat bolus resulted in the induction of several NAFLD-associated genes. Together, the results of this study indicate that saturated fat intake has immediate effects on metabolic function. 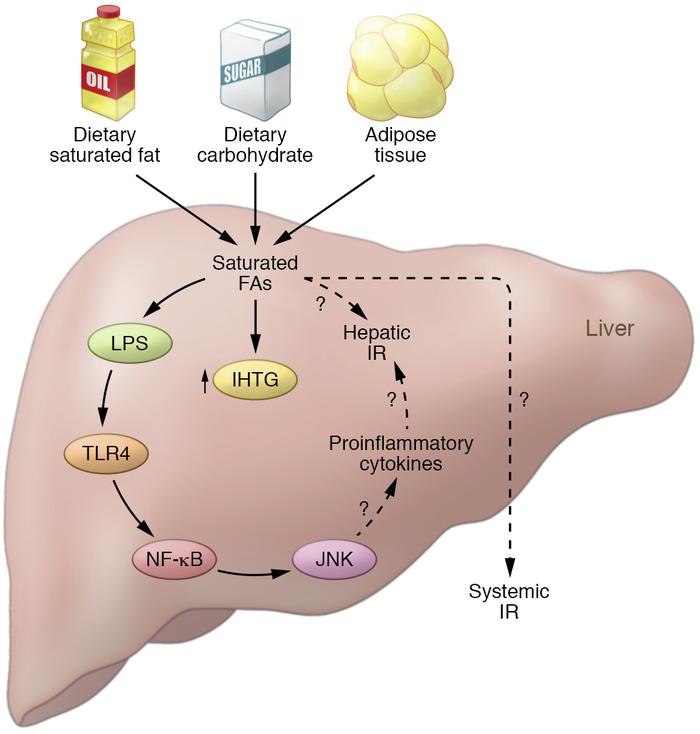 In this issue, Hernández et al. show that a single oral intake of saturated fat increases the level of IHTGs. In turn, saturated fatty acids from dietary fat and carbohydrate or from adipose tissue directly promote the upregulation of NAFLD-associated pathways and may promote both systemic and hepatic insulin resistance, as well as contribute to IHTG. FAs, fatty acids; IR, insulin resistance.