Huntington’s disease is a neurodegenerative disorder caused by a polyglutamine repeat in the Huntingtin gene (HTT). Although suppressing the expression of mutant HTT (mHTT) has been explored as a therapeutic strategy to treat Huntington’s disease, considerable efforts have gone into developing allele-specific suppression of mHTT expression, given that loss of Htt in mice can lead to embryonic lethality. It remains unknown whether depletion of HTT in the adult brain, regardless of its allele, could be a safe therapy. Here, we report that permanent suppression of endogenous mHTT expression in the striatum of mHTT-expressing mice (HD140Q-knockin mice) using CRISPR/Cas9-mediated inactivation effectively depleted HTT aggregates and attenuated early neuropathology. The reduction of mHTT expression in striatal neuronal cells in adult HD140Q-knockin mice did not affect viability, but alleviated motor deficits. Our studies suggest that non–allele-specific CRISPR/Cas9-mediated gene editing could be used to efficiently and permanently eliminate polyglutamine expansion–mediated neuronal toxicity in the adult brain.

Behavioral analysis of heterozygous HD140Q-KI mice with depletion of neuronal HTT in the striatum by AAV-HTT-gRNA/AAV-MECP2-Cas9 injection. 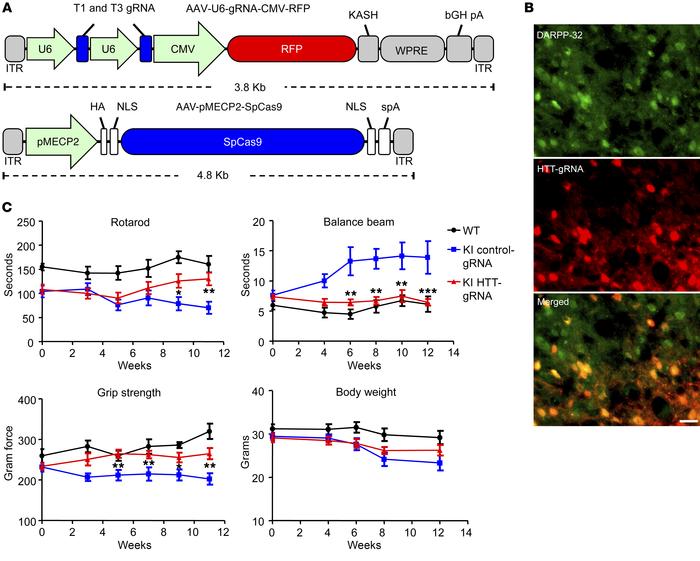