Hypoglycemia activates the counterregulatory response (CRR), a neural-endocrine reflex that restores euglycemia. Although effective if occasionally activated, repeated induction of the CRR leads to a decline in responsiveness and prolonged exposure to hypoglycemia. The mechanism underlying this impairment is not known. We found that the reduction in epinephrine release that characterizes a suppressed CRR involves a long-lasting form of sympatho-adrenal synaptic plasticity. Using optogenetically evoked catecholamine release, we show that recurrent hypoglycemia reduced the secretory capacity of mouse adrenal chromaffin cells. Single activation of the CRR increased the adrenal levels of tyrosine hydroxylase (TH), the rate-limiting enzyme for catecholamine synthesis, but this was prevented by repeated activation. In contrast, the level of neuropeptide Y (NPY), an adrenal cotransmitter, remained elevated after recurrent hypoglycemia. Inhibition of NPY or Y1 signaling, either transgenically or pharmacologically, prevented the attenuation of both TH expression and epinephrine release. These results indicate that impairment of the CRR involves suppressed activity at the adrenal level. Interfering with the peripheral NPY–dependent negative feedback loop may provide a way to avoid the pathophysiological consequences of recurrent hypoglycemia which are common in the diabetic state. 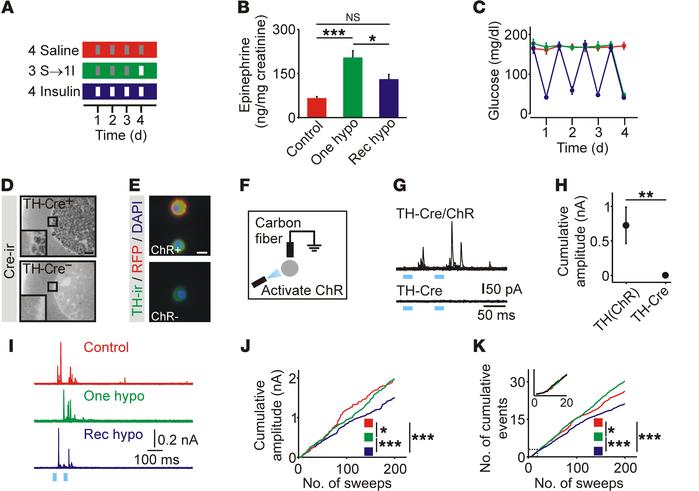