Stored blood: how old is too old?

Stored blood: how old is too old?

Transfusion of rbc is a routine, often lifesaving procedure that depends on a stored supply of blood. In the US, 42 days is the maximum duration allowed for rbc storage; however, several lines of evidence indicate that patients that receive blood at the upper end of this storage limit are at a higher risk of morbidity and mortality. In this issue of the , Rapido and colleagues evaluated the effects of transfusing one unit of blood close to the storage limit into healthy adults. Compared to those that received rbc stored for five weeks or less, those that received blood stored for six weeks showed several effects associated with increased harm, including disruption in iron handling, increased extravascular hemolysis, and the formation of circulating non–transferrin-bound iron. Together, the results of this study suggest that current maximum storage durations should be carefully reevaluated. 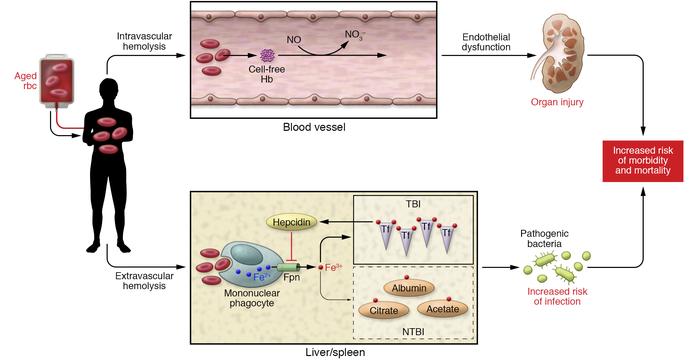 Intravascular hemolysis occurs, resulting in the release of breakdown products from aged rbc and cell-free hemoglobin (Hb, represented by cell-free Hb). Additionally, scavenging of NO occurs through the dioxygenation reaction. Release of arginase from lysing rbc also reduces the substrate -arginine for NO synthase, further reducing NO bioavailability (not depicted). Reduced NO decreases vessel smooth muscle relaxation and contributes to endothelial dysfunction, with consequent organ injury. Extravascular hemolysis occurs when damaged rbc are acutely delivered and exceed the capacity of the mononuclear phagocyte system of the liver and spleen. Aged rbc are phagocytosed, heme is catabolized, and iron is ultimately released through the ferroportin (Fpn) export system and taken up by transferrin (Tf), the major iron transport protein in the body. With aged rbc transfusion, the large amount of iron exported out of the monocyte/macrophage results in the development of NTBI — iron complexed to other compounds such as albumin, citrate, etc. The disruption in iron handling may provide a readily available source of iron for pathogens and increase infectious risk in susceptible hosts. Note that a rise in transferrin-bound iron also occurs and provides a feedback loop to increase hepcidin, which negatively regulates iron export through ferroportin. However, this compensatory mechanism is insufficient to avoid formation of NTBI. For simplicity, only key elements of the two pathways are depicted.