Pancreatic β cells have one of the highest protein secretion burdens in the body, as these cells must synthesize and secrete insulin in proportion to postprandial rises in blood glucose. Remarkably, it is now becoming clear that adult β cells retain plasticity and can dedifferentiate into embryonic fates or adopt alternate islet endocrine cell identities. This property is especially important, because changes in cell fate alter β cell function and could form the basis for defects in insulin secretion that occur early in the pathogenesis of the most prevalent form of β cell dysfunction, type 2 diabetes. In this issue, three different studies provide complementary perspectives on how the transcription factors NK2 homeobox 2 (NKX2.2), paired box 6 (PAX6), and LIM domain–binding protein 1 (LDB1) serve to maintain mature adult β cell identity, revealing clues as to how adult β cells can partially dedifferentiate or become reprogrammed into other islet endocrine cells.

Roles of the islet cell TFs PAX6, NKX2.2, and LDB1-ISL1 in the maintenance of adult β cell identity. 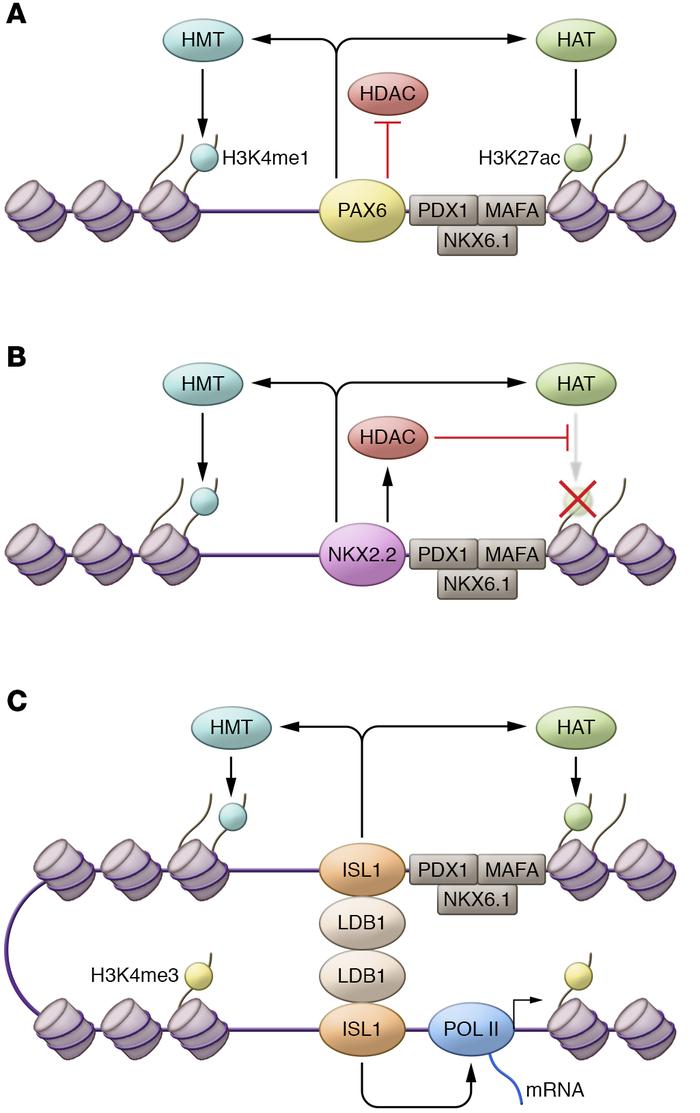 () An example of how PAX6 might regulate the activity of a β cell enhancer. PAX6 binds to its DNA sequence with a combination of different β cell–specific TFs, represented by PDX1, NKX6.1, and MAFA. Alongside the β cell TFs, PAX6 could modulate the activity status of the enhancer by promoting recruitment of histone methyltransferases (HMTs) that deposit H3K4me1 and histone acetyltransferases (HATs) required for H3K27ac, while inhibiting recruitment of histone deacetylases (HDACs). () In a scenario similar to that depicted in , NKX2.2 could regulate the activity state of a poised enhancer by binding to its sequence along with β cell–specific TFs and recruiting HMTs to maintain H3K4me1 and HDACs to maintain deacetylation of H3K27. () LDB1-ISL1 multimeric complexes bind sequences in the enhancer along with β cell TFs to form looped chromatin structures, which may be necessary for high-level enhancer activity toward active (H3K4me3-marked) target promoters. Whether the looping structure is necessary for the active enhancer marks H3K4me1 and H3K27ac, or occurs as a consequence of these marks, remains to be determined.