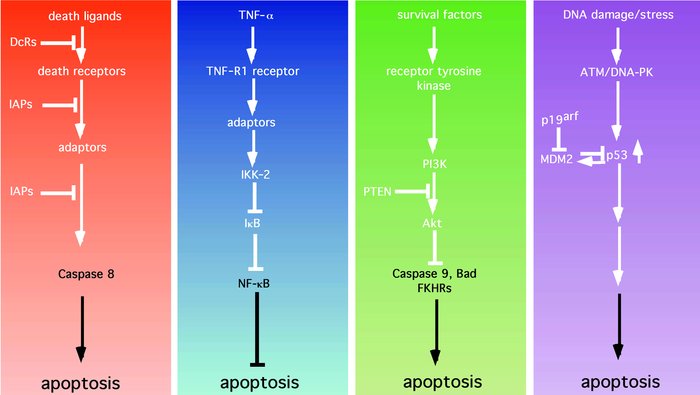 Apoptotic and antiapoptotic signaling pathways. () Death pathways. Death ligands typified by FasL, TNF-α, Apo2L, and Apo3L bind to and activate death receptors (e.g., Fas). This activation can be blocked by the presence of nonfunctioning decoy receptors (DcRs). Receptor trimerization and activation leads to the recruitment of adaptor molecules (such as FADD) that can recruit and activate caspase 8. Activation of caspase 8 can be blocked by inhibitors of apoptosis such as cIAP-1 and cIAP-2, as well as TRAF-1 and TRAF-2. () The NF-κB survival pathway. In addition to eliciting a death signal, TNF-α transmits a survival signal. Here, binding to the TNF-R1 receptor leads to the recruitment of adaptors that are capable of indirectly activating IκB kinase 2 (IKK-2), which phosphorylates IκB, leading to ubiquitin-mediated proteolysis of IκB. Loss of IκB allows NF-κB to localize to the nucleus and to induce the expression of antiapoptotic factors such as the IAPs, the TRAFs, and Bfl-1. () The PI3K/Akt pathway. Soluble growth and survival factors such as IL-3 and IGFs bind to and activate transmembrane receptor tyrosine kinases. Activation and phosphorylation of the receptors allows the recruitment and activation of PI3K. PI3K phosphorylates phosphatidylinositol 3,4-bisphosphate (PI3,4P2) to generate PIP3. This step is antagonized by the product of the tumor-suppressor gene , which acts as a lipid phosphatase. PIP3 activates downstream targets, such as the serine-threonine kinase Akt. Akt, in turn, phosphorylates and inactivates a number of substrates including the proapoptotic proteins Bad, caspase 9, and FKHR, and thereby inhibits apoptosis. () The p53 pathway. Cellular stresses — particularly DNA damage —are sensed by proteins such as ATM and DNA-PK, which phosphorylate and stabilize p53. p53 induces apoptosis by an as-yet undefined mechanism. The action of p53 is opposed by Mdm2, which binds to and inactivates p53. Mdm2, in turn, is inhibited by p19arf, the product of the tumor-suppressor gene.