Homeostatic control of tissue oxygenation is achieved largely through changes in blood flow that are regulated by the classic physiological response of hypoxic vasodilation. The role of nitric oxide (NO) in the control of blood flow is a central tenet of cardiovascular biology. However, extensive evidence now indicates that hypoxic vasodilation entails -nitrosothiol–based (SNO-based) vasoactivity (rather than NO per se) and that this activity is conveyed substantially by the βCys93 residue in hemoglobin. Thus, tissue oxygenation in the respiratory cycle is dependent on -nitrosohemoglobin. This perspective predicts that red blood cells (RBCs) may play an important but previously undescribed role in cardioprotection. Here, we have found that cardiac injury and mortality in models of myocardial infarction and heart failure were greatly enhanced in mice lacking βCys93 -nitrosylation. In addition, βCys93 mutant mice exhibited adaptive collateralization of cardiac vasculature that mitigated ischemic injury and predicted outcomes after myocardial infarction. Enhanced myopathic injury and mortality across different etiologies in the absence of βCys93 confirm the central cardiovascular role of RBC-derived SNO-based vasoactivity and point to a potential locus of therapeutic intervention. Our findings also suggest the possibility that RBCs may play a previously unappreciated role in heart disease.

Enhanced MI-induced cardiac injury and mortality in the absence of βCys93. 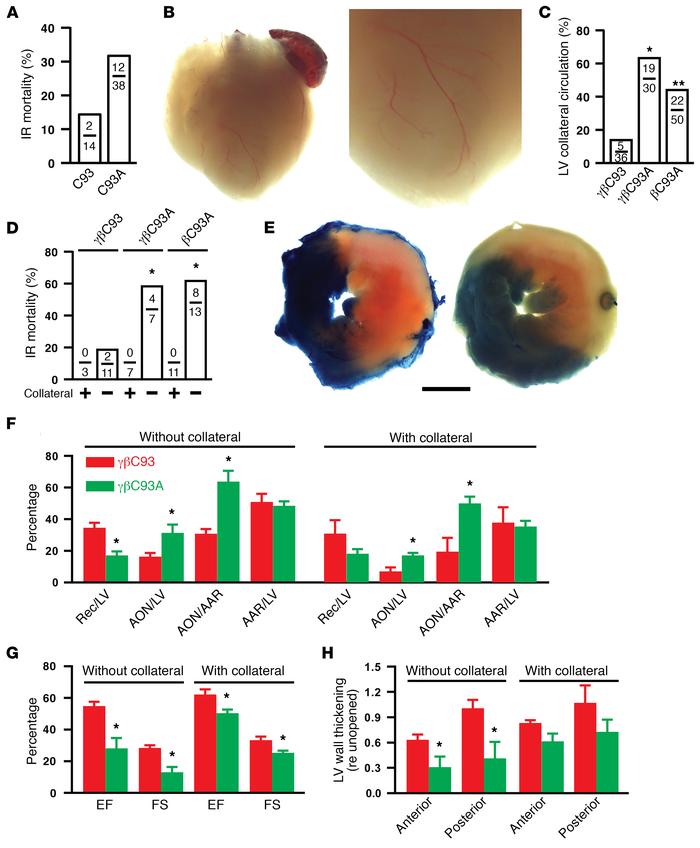 () IR-induced mortality is greatly enhanced in mice lacking βCys93 (C93A = γβC93A and βC93A) versus control mice (C93 = γβC93). In panels , , and , numbers within histograms specify absolute ratios for each observation () Representative angiography illustrating collateralized circulation of the LV free wall to supply the apex in a mutant βC93A mouse. Lower (left; ×6.7) and higher (right; ×15.8) magnification views are shown. () Collateralization supplying the LV is significantly more likely in γβC93A and βC93A versus γβC93 mice. *P < 0.0001 for γβC93 versus γβC93A and **P = 0.0043 for γβC93 versus βC93A, respectively, by Fisher’s exact test (2-sided). The difference in collateralization between γβC93A and βC93A mice was not significant ( > 0.05). () Mortality during 24 hours of IR is determined by the presence versus absence of collateral circulatory supply of the LV and is enhanced in γβC93A and βC93A versus γβC93 mice. * < 0.0001 vs. collateral by Fisher’s exact test (2-sided). () Representative Evans blue/TTC-stained LV slices illustrating areas of recovery (red) and necrosis (white) in a γβC93 mouse (left) and in a γβC93A mouse (right). Scale bar: 2 mm. () In γβC93A versus γβC93 control mice surviving 24 hours after IR, the area of recovery (Rec/LV; LV, total LV area) is significantly diminished and the area of necrosis (AON/LV) and the ratio of area of necrosis/area at risk (AON/AAR) are significantly enhanced, and enhanced injury was evident in the absence of βC93 even when collateralization was present. () Echocardiography of surviving mice reveals that LV ejection fraction (EF) and fractional shortening (FS) are significantly diminished in γβC93A versus γβC93 control mice, and these differences were evident even when collateralization was present. () Thickening of the LV anterior and posterior walls in the absence of collateral blood supply is significantly diminished in γβC93A versus γβC93 mice. In –, = 3–7 for mice with collateral blood supply and = 3–9 for mice without collateral blood supply. * < 0.05 vs. γβC93 by Student’s test (2-tailed).