Stroke is one of the most common diseases and a leading cause of death and disability. Cessation of cerebral blood flow (CBF) leads to cell death in the infarct core, but tissue surrounding the core has the potential to recover if local reductions in CBF are restored. In these areas, detrimental peri-infarct depolarizations (PIDs) contribute to secondary infarct growth and negatively affect stroke outcome. However, the cellular pathways underlying PIDs have remained unclear. Here, we have used in vivo multiphoton microscopy, laser speckle imaging of CBF, and electrophysiological recordings in a mouse model of focal ischemia to demonstrate that PIDs are associated with a strong increase of intracellular calcium in astrocytes and neurons. We found that astroglial calcium elevations during PIDs are mediated by inositol triphosphate receptor type 2–dependent (IP3R2-dependent) release from internal stores. Importantly, -deficient mice displayed a reduction of PID frequency and overall PID burden and showed increased neuronal survival after stroke. These effects were not related to local CBF changes in response to PIDs. However, we showed that the release and extracellular accumulation of glutamate during PIDs is strongly curtailed in -deficient mice, resulting in ameliorated calcium overload in neurons and astrocytes. Together, these data implicate astroglial calcium pathways as potential targets for stroke therapy. 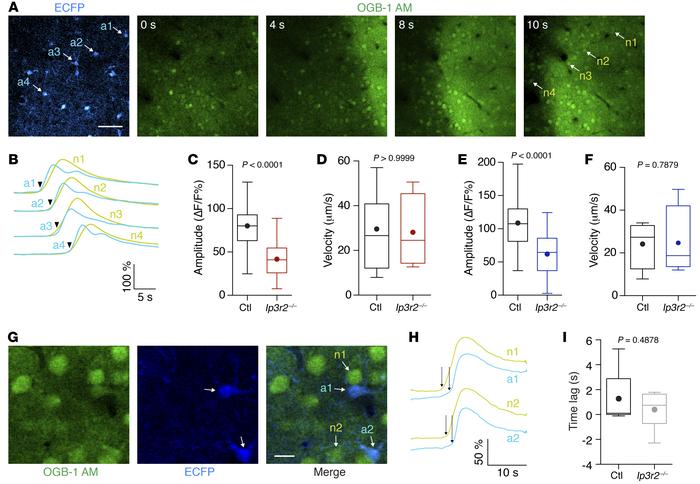 ( and ) OGB-1 AM was injected into peri-infact cortex, and mice expressing ECFP under the promoter were imaged using multiphoton microscopy. PIDs were identified by typical propagation of cellular calcium transients in neurons (n1–n4) and astrocytes (a1–a4; identified by their ECFP expression). Arrowheads in indicate propagation. Scale bar: 50 μm. ( and ) The calcium amplitude in astrocytes from mice ( = 117 cells from 5 mice) was significantly smaller compared with control mice ( = 147 cells from 9 mice), while the propagation velocities remained similar. ( and ) The amplitude of neuronal calcium transients during PIDs was also reduced in mice compared with controls, while the velocity remained unaltered ( = 104 cells from 5 mice vs. = 142 cells from 9 mice). (–) High temporal and spatial resolution imaging of astrocytes (identified by ECFP expression) and neurons during PIDs showed that astrocytes lagged behind neighboring neurons by 1.29 ± 0.7 seconds in control mice and 0.40 ± 0.6 seconds in mice ( = 8 neuron-astrocyte pairs from 4 control mice vs. = 6 pairs from 3 mice). Scale bar: 10 μm. Tukey’s box-and-whisker plots indicate the median (line), mean (circle), IQR (box), and 1.5 IQR (whiskers) in all figures. All values were determined by Mann-Whitney test. Ctl, control; ΔF/F, fluorescence intensity relative to baseline.