HIV-1 disease is associated with pathological effects on T-cell production, destruction, and distribution. Using the deuterated (2H) glucose method for endogenous labeling, we have analyzed host factors that influence T-cell turnover in HIV-1–uninfected and –infected humans. In untreated HIV-1 disease, the average half life of circulating T cells was diminished without compensatory increases in cell production. Within 12 weeks of the initiation of highly active antiretroviral therapy (HAART), the absolute production rates of circulating T cells increased, and normal half-lives and production rates were restored by 12–36 months. Interpatient heterogeneity in the absolute degree of turnover correlated with the relative proportion of naive- and memory/effector-phenotype T cells in each of the CD4+ and CD8+ populations. The half-lives of naive-phenotype T cells ranged from 116–365 days (fractional replacement rates of 0.19–0.60% per day), whereas memory/effector-phenotype T cells persisted with half-lives from 22–79 days (fractional replacement rates of 0.87–3.14% per day). Naive-phenotype T cells were more abundant, and the half-life of total T cells was prolonged in individuals with abundant thymic tissue, as assessed by computed tomography. Such interpatient variation in T-cell kinetics may be reflective of differences in functional immune reconstitution after treatment for HIV-1 disease. 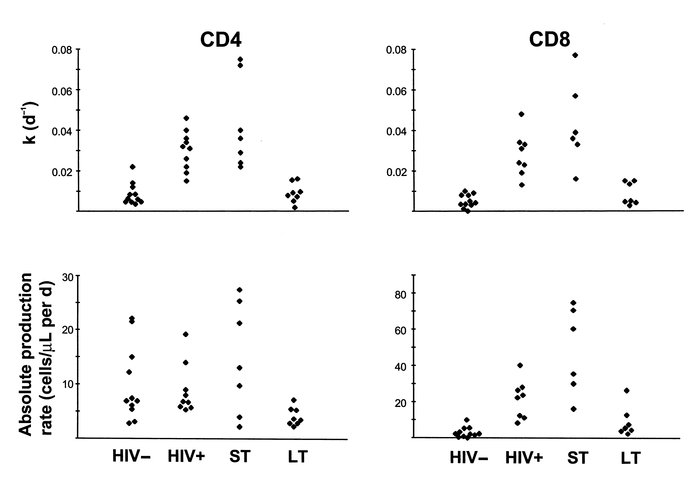 k and absolute production rates of CD4+ and CD8+ T cells in HIV-1–seronegative and HIV-1–seropositive subjects who were either untreated or treated with HAART. Values of k (per day) and of absolute production rates (cells/μL per day) for peripheral blood CD4+ and CD8+ T cells are shown for different groups of subjects, including HIV-1–seronegative subjects (HIV–) and HIV-1–seropositive subjects who were either untreated (HIV+) or treated with HAART for 12 weeks (ST) or for 12–36 months (LT). Some of the data points shown in this figure are from subjects previously described in ref. (see Table for details).