The development of high-affinity antibodies in response to infection is an iterative process in which B cells cycle between proliferation/somatic hypermutation and antigen-driven selection. These processes occur within specific regions of the secondary lymphoid structures known as germinal centers (GCs) and the environmental and signaling cues provided by these regions guide the GC reactions that drive B cell maturation and antibody production, ultimately determining B cell fate. In this issue of the , Nakagawa and colleagues examine the role of miR-155, a microRNA that is required for GC development and the production of high-affinity antibodies. They show that miR-155 is highly expressed in positively selected B cells and promotes survival of these cells by orienting the Myc transcription program toward survival rather than apoptosis through the inhibition of the transcriptional regulator JARID2. These findings illustrate the fine balance between apoptosis and proliferation that is required for the development of high-affinity antibodies.

Molecular control of the Myc program in the GC LZ during antigen selection. 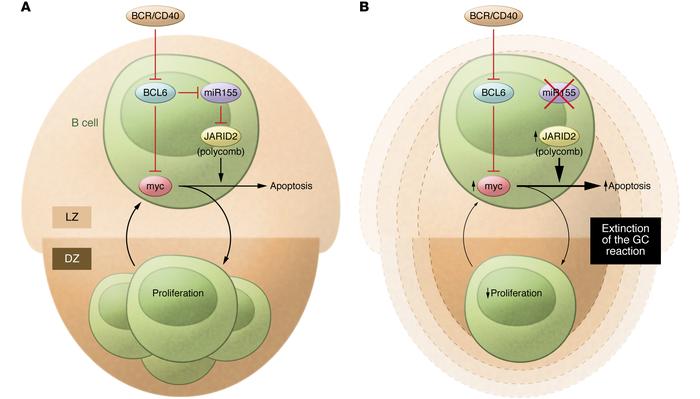 () In mature GCs, a subset of LZ B cells expresses high levels of Myc. These cells downregulate BCL6 upon integration of signals from T cells and antigen through the BCR and CD40, respectively, allowing Myc and miR-155 to accumulate. Increased levels of Myc promote DZ reentry and division of the cells undergoing selection. Expression of the Myc transcriptional program also makes cells more sensitive to apoptosis, particularly in the absence of strong growth-promoting signals. Expression of miR-155 downregulates the levels of JARID2, which tips the Myc program toward proliferation rather than apoptosis. () In the absence of miR-155, selection is impaired, as increased apoptosis reduces the number of B cells capable of DZ reentry and eventually exhausts the GC reaction. The result is a failure to produce high-affinity antibodies in a timely fashion.