Although the use of antioxidants for the treatment of cancer and HIV/AIDS has been proposed for decades, new insights gained from redox research have suggested a very different scenario. These new data show that the major cellular antioxidant systems, the thioredoxin (Trx) and glutathione (GSH) systems, actually promote cancer growth and HIV infection, while suppressing an effective immune response. Mechanistically, these systems control both the redox- and NO-based pathways (nitroso-redox homeostasis), which subserve innate and cellular immune defenses. Dual inhibition of the Trx and GSH systems synergistically kills neoplastic cells in vitro and in mice and decreases resistance to anticancer therapy. Similarly, the population of HIV reservoir cells that constitutes the major barrier to a cure for AIDS is exquisitely redox sensitive and could be selectively targeted by Trx and GSH inhibitors. Trx and GSH inhibition may lead to a reprogramming of the immune response, tilting the balance between the immune system and cancer or HIV in favor of the former, allowing elimination of diseased cells. Thus, therapies based on silencing of the Trx and GSH pathways represent a promising approach for the cure of both cancer and AIDS and warrant further investigation.

Role of the Trx and GSH systems in cellular nitroso-redox homeostasis and signaling. 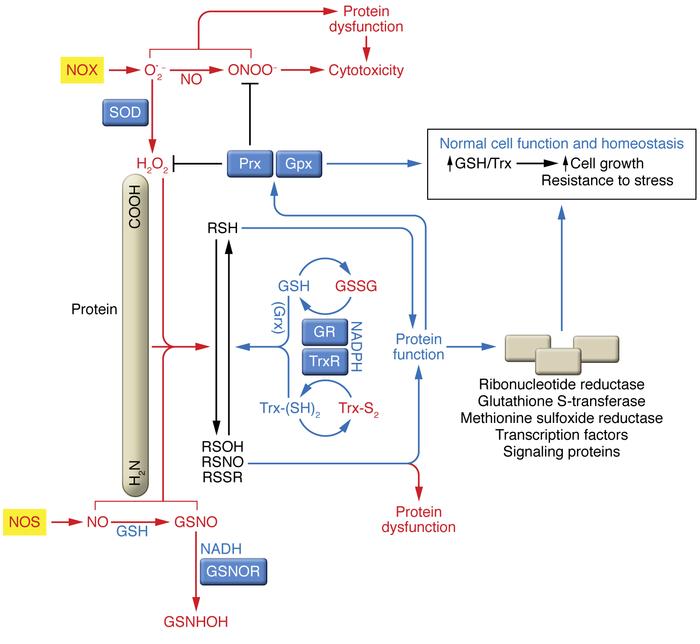 ROS and RNS such as O2–, H2O2, and NO are generated in cells by the regulated activity of dedicated enzymes such as NADPH oxidases (NOX) and NOS and by additional sources such as mitochondria. NO is efficiently converted into low-molecular-weight SNOs (e.g., S-nitrosoglutathione [GSNOs]), which convey the large part of NO bioactivity. NO can react with O2– to produce ONOO–, a potent oxidant and nitrating agent. ROS and RNS play various roles in both homeostatic and pathological processes. The physiological roles of H2O2 and NO and SNO are principally mediated through the S-oxidation or S-nitrosylation of protein Cys residues (RSH) to form sulfenic acids (RSOH), disulfides (RSSR), and protein S-nitrosothiols (RSNO), thereby altering protein structure and function. GSH and Trx and associated redox enzymes, such as glutaredoxin (Grx), reverse these thiol modifications. Oxidized GSH (GSSG) and oxidized Trx (Trx-S2) are reduced by GSH reductase (GR) and TrxR, respectively, at the expense NADPH oxidation. The thiol-reducing activity of GSH and Trx is of key importance in maintaining the enzymatic activity of members of the peroxiredoxin (Prx) and GSH peroxidase (Gpx) enzymes, which remove peroxides. Additionally, GSH acts together with GSH S-transferases (GST enzymes) to detoxify various xenobiotics, and Trx acts with methionine sulfoxide reductases to repair oxidized methionines. GSNO is metabolized by the NADH-dependent GSNOR, which thereby shifts the cellular equilibrium to disfavor protein SNOs, while Trxs and TrxRs denitrosylate proteins directly. GSNHOH, -hydroxy sulfenamide.