Hirschsprung’s disease, Down syndrome, and missing heritability: too much collagen slows migration

Hirschsprung’s disease, Down syndrome, and missing heritability: too much collagen slows migration

Hirschsprung’s disease (HSCR) causes functional intestinal obstruction due to the absence of the enteric nervous system (ENS) in the distal bowel and is usually diagnosed shortly after birth or during childhood. While several genetic and nongenetic factors have been linked to HSCR, the underlying mechanisms that prevent ENS precursors from colonizing distal bowel during fetal development are not completely understood in many affected children. In this issue of the , Soret and colleagues identify a new mechanism that causes HSCR-like disease in mice and involves deposition of excess collagen VI in the intestine by migrating ENS precursors as they colonize fetal bowel. Remarkably, their findings may explain some of the so-called missing heritability of HSCR and suggest a mechanism for increased HSCR incidence in children with Down syndrome (trisomy 21).

Formation of the ENS requires precise regulation of ENCDC proliferation, migration, and differentiation. 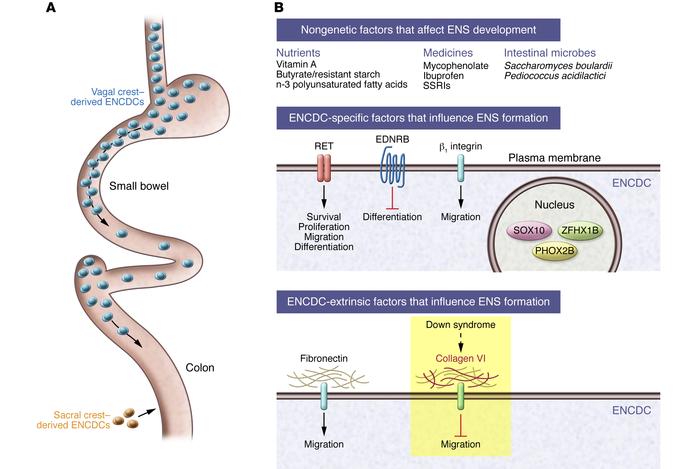 () Schematic representation of the mouse bowel at E12.5. Vagal crest–derived ENCDCs (blue cells) migrate to and colonize the fetal bowel, where these ENS precursors differentiate into diverse neuron and glia subtypes. Sacral crest–derived ENCDCs also contribute to ENS formation in the hindgut, but to a lesser extent. HSCR is a life-threatening birth defect, characterized by a region of distal bowel in which the ENS is missing. () Simplified view of factors known to influence ENS development. Several genetic and nongenetic risk factors have been identified for this disease; however, the underlying cause of HSCR in many cases is not known. Nongenetic factors that cause HSCR-like disease in mice include maternal vitamin A deficiency and in utero exposure to mycophenolate. Several additional medicines, nutritional factors, and microorganisms also affect ENS development (–). HSCR-associated mutations have been identified in genes encoding factors that directly influence ENCDC behavior and phenotypes, including receptors RET and EDNRB, β1 integrin, and transcription factors SOX10, PHOX2B, and ZFHX1B. Mutations of these factors result in dysfunctional ENS formation due to alterations in ENCDC survival, proliferation, migration, and/or other functions essential for normal innervation of the gut. Interactions between ENCDCs and the extracellular matrix along the migratory route also influence ENCDC behavior. In this issue, Soret and colleagues demonstrate that animals with excess collagen VI develop HSCR-like disease due to decreased ENCDC migration (). Moreover, the inhibitory effect of collagen VI on ENCDC migration may partially explain why children with Down syndrome have an increased risk of HSCR, since collagen VI genes are on chromosome 21. For more details about ENS development and a more complete view of factors associated with HSCR, see refs. – and . SSRI, selective serotonin reuptake inhibitor.