The bright side of dark matter: lncRNAs in cancer

The bright side of dark matter: lncRNAs in cancer

The traditional view of genome organization has been upended in the last decade with the discovery of vast amounts of non–protein-coding transcription. After initial concerns that this “dark matter” of the genome was transcriptional noise, it is apparent that a subset of these noncoding RNAs are functional. Long noncoding RNA (lncRNA) genes resemble protein-coding genes in several key aspects, and they have myriad molecular functions across many cellular pathways and processes, including oncogenic signaling. The number of lncRNA genes has recently been greatly expanded by our group to triple the number of protein-coding genes; therefore, lncRNAs are likely to play a role in many biological processes. Based on their large number and expression specificity in a variety of cancers, lncRNAs are likely to serve as the basis for many clinical applications in oncology.

Promise of lncRNAs in oncology. 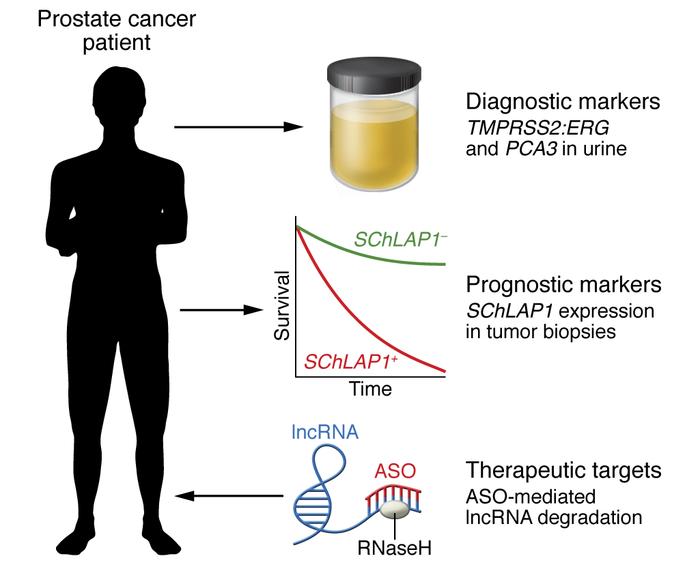 The vast number of lncRNAs and their cancer-specific expression portends great promise for taking advantage of lncRNAs in cancer patient management across diagnostic and prognostic biomarkers and as therapeutic targets. Here we have highlighted prostate cancer as an exemplar. The lncRNA is expressed very specifically by prostate tumor cells, which led to its use in a commercial urine diagnostic test, along with the prostate tumor–specific gene fusion RNA (, ). The lncRNA has been shown to be a very powerful prognostic marker of metastatic progression risk after prostatectomy for high-risk prostate cancer and could be used to guide therapy intensification through an ISH test (). lncRNAs are also very attractive therapeutic targets, and several targeting strategies have shown promise, including ASOs, which have been approved for 2 noncancer diseases (, ). We expect that lncRNA-based therapeutics will see a rapid clinical expansion in the near future.