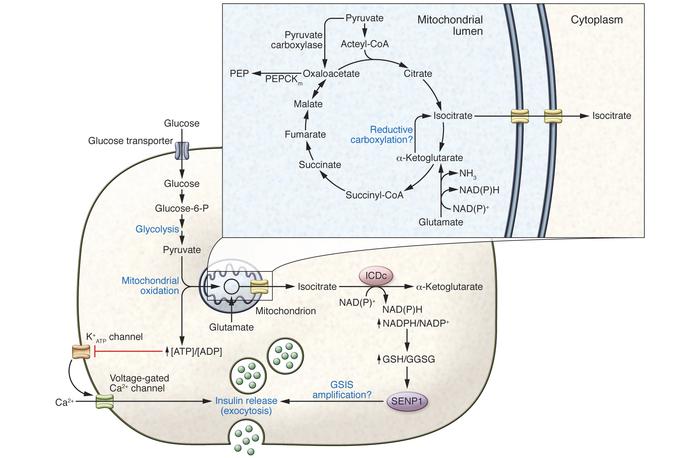 In β cells, glucose uptake and metabolism result in depolarization and subsequent opening of voltage-gated Ca2+ channels, which in turn triggers insulin granule secretion. Amplification of insulin secretion requires pyruvate metabolism in the mitochondria, which in β cells is driven by high rates of pyruvate carboxylation and generation of oxaloacetate (inset). Several metabolites downstream of oxaloacetate have been evaluated for their ability to amplify GSIS, including citrate, malate, aspartate, and PEP. Of these, generation of PEP in the mitochondria is critical for GSIS. In this issue, Ferdaoussi, Dai, and colleagues demonstrate that the transfer of reducing equivalents mediated by the conversion of isocitrate to α-ketoglutarate by ICDc in the cytosol generates NADPH and maintains glutathione in its reduced form, GSH. GSH then activates SENP1, which deSUMOylates a target protein (not yet identified), thus promoting (or derepressing) insulin release. Glutamate metabolism is also involved in insulin secretion, and mutations in the inhibitory GTP-binding site of GDH, which converts glutamate to α-ketoglutarate in the mitochondria, increase insulin secretion. Reductive carboxylation of α-ketoglutarate in the mitochondria generates isocitrate and is thus a potential pathway through which glutamate metabolism may feed into the ICDc/SENP1-mediated amplification pathway.