The mammalian heart contains a population of resident macrophages that expands in response to myocardial infarction through the recruitment of monocytes. Infarct macrophages exhibit high phenotypic diversity and respond to microenvironmental cues by altering their functional properties and secretory profile. In this issue of the , de Couto and colleagues demonstrate that infiltrating macrophages can be primed to acquire a cardioprotective phenotype in ischemic heart and exert this proactive effect through activation of an antiapoptotic program in cardiomyocytes. This study supports the growing body of evidence that suggests that macrophage subpopulations can be modulated to mediate cytoprotective, reparative, and even regenerative functions in the infarcted heart. The cellular mechanisms and molecular signals driving these macrophage phenotypes are yet unknown; however, harnessing the remarkable potential of the macrophage in regulating cell survival and tissue regeneration may hold therapeutic promise for myocardial infarction.

Abundant macrophages infiltrate the infarcted heart and can be primed to exert reparative, cardioprotective, and regenerative functions. 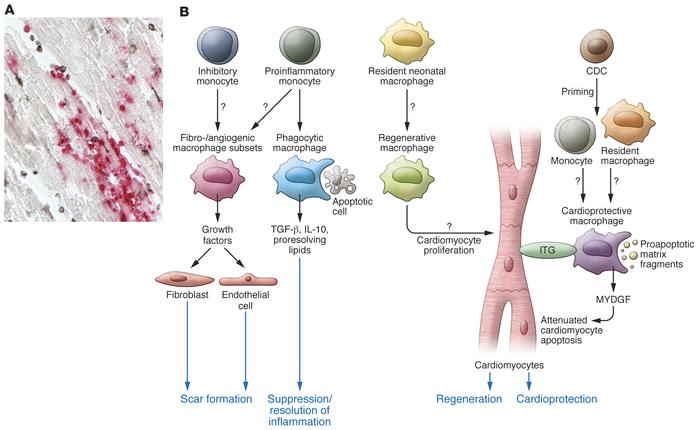 () This section of reperfused canine infarct (1-hour ischemia/24-hour reperfusion) shows the presence of a large number of newly recruited myeloid cells (red) and mature macrophages (black) that are in close association with cardiomyocytes (sample prepared as previously reported, ref. ). () Schematic of the multiple protective roles of infarct macrophages that have been suggested by recent experimental findings (, ). The adult mammalian heart contains a resident macrophage population; however, infarct macrophages are primarily derived from recruited proinflammatory and inhibitory monocyte subsets and can acquire many distinct phenotypes in response to microenvironmental cues. During the inflammatory phase of healing, macrophages may act as phagocytotic cells. Upon ingestion of apoptotic cells, macrophages release antiinflammatory mediators (such as IL-10 and TGF-β) that contribute to suppression of the inflammatory response. Fibrogenic and angiogenic macrophage subsets may regulate fibroblast and endothelial cell phenotypes to promote repair. Studies in neonatal mouse models of cardiac injury suggest that resident neonatal macrophages may have regenerative properties, thereby stimulating cardiomyocyte proliferation. De Couto and coworkers demonstrate that macrophages primed by CDCs protect cardiomyocytes from apoptosis. The cardioprotective actions of these macrophages may involve several distinct mechanisms, including secretion of antiapoptotic mediators (such as MYDGF), contact-dependent actions on cardiomyocyte integrin (ITG) signaling, or clearance of proapoptotic matrix fragments.