Pancreatic β cells support glucose homeostasis with great precision by matching insulin release to the metabolic needs of the moment. Previous gene-expression analysis indicates that adult β cells not only produce cell-specific proteins, but also repress a small set of housekeeping genes — such as those encoding lactate dehydrogenase A (LDHA), solute transporter MCT1, and hexokinase 1 (HK1) — that would otherwise interfere with normal β cell function. In this issue of the JCI, Dhawan et al. elucidate a molecular mechanism involved in β cell–specific repression of and that is mediated by induction of the de novo DNA methyltransferase DNMT3A during the first weeks after birth. Failure to induce DNMT3A-dependent methylation disrupts normal glucose-induced insulin release in adult life. The results of this study reinforce the idea that the phenotype of adult β cells has two faces and that failure to achieve selective gene repression undermines β cell support of normal glucose homeostasis. 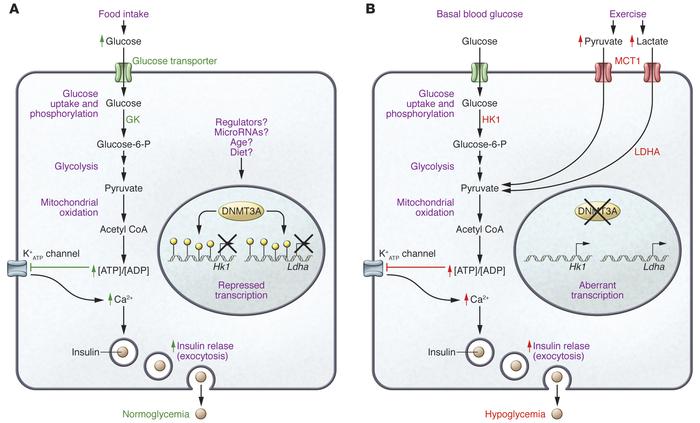 () Physiological, nutrient-induced insulin release during a carbohydrate-containing meal depends on the expression of key proteins in pancreatic β cells that couple a rise in circulating glucose to an accelerated metabolic flux, leading to an increased [ATP]/[ADP] ratio, closure of ATP-sensitive potassium channels and a rise in cytosolic calcium (), and appropriate levels of insulin secretion that support normoglycemia. In this issue, Dhawan et al. () show that the DNA methyltransferase DNMT3A is critical for repression of disallowed genes and that would otherwise interfere with β cell function. The factors that induce and maintain DNMT3A in β cells have not been fully elucidated. () Inappropriate insulin secretion, as in too much insulin under basal conditions or activation of induction of secretion by nonphysiological stimuli, can cause hypoglycemia (). In the absence of DNMT3A, expression of HK1 elevates basal insulin release because the enzyme has a high affinity for its substrate glucose, and elevated LDHA promotes conversion of lactate into pyruvate. Moreover, increased levels of the pyruvate transporter MCT1 promote inappropriate insulin secretion (). Dhawan and colleagues show that murine β cells switch off and expression when cells mature the first weeks after birth, as the result of DNMT3A-mediated cytosine methylation (yellow circles) in the and gene promoters.