Kidney growth and hypertrophy: the role of mTOR and vesicle trafficking

Kidney growth and hypertrophy: the role of mTOR and vesicle trafficking

The kidney, like other organs, grows in constant proportion to the rest of the body. When one kidney is removed, the remaining one hypertrophies. In a comprehensive series of studies, Chen et al. show that growth during maturation is mediated by the mTORC1 signaling pathway, which is induced by EGF-like peptides, and requires PI3K, PDK, AKT, mTORC2, and activation of mTORC1 through the combined effects of TSC and RHEB as part of a multiprotein complex localized on lysosomes. However, compensatory growth is mediated by amino acids, which act on mTORC1 independently of the previous pathway, and requires a class III PI3K (VPS34) that is known to be involved in vesicle trafficking to the lysosomes. 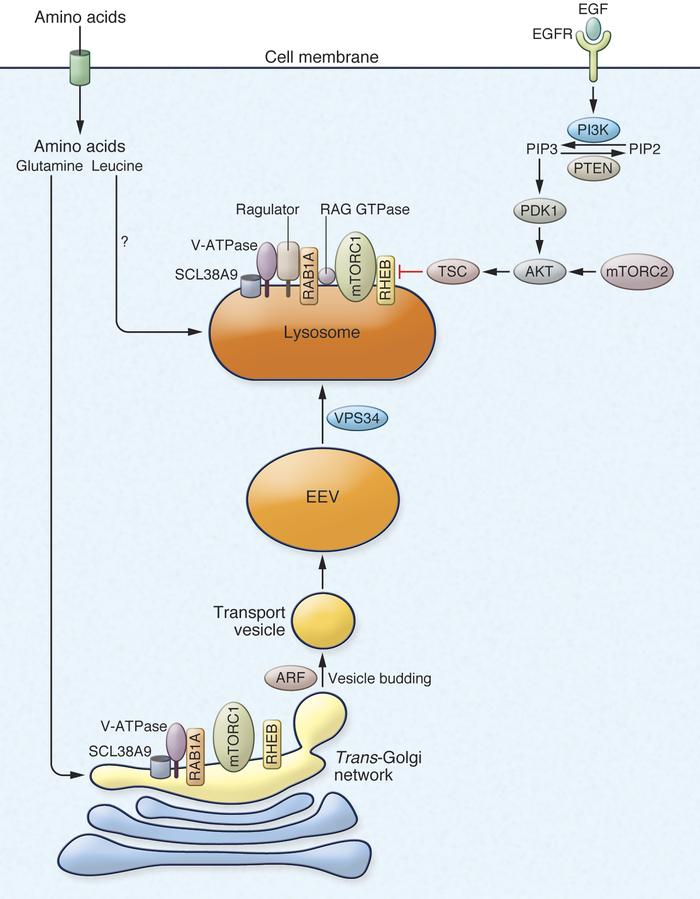 Growth factor (EGF) binding to its respective RTK (EGFR) activates PI3K, resulting in conversion of PIP2 to PIP3. In turn, PIP3 initiates a PDK1-dependent cascade that activates AKT, which in turn phosphorylates TSC, resulting in inhibition of the tonic mTORC1 inhibitor RHEB. mTORC1 is recruited into a large protein complex on the lysosome surface composed of RAG GTPase, Ragulator, V-ATPase, and the amino acid transporter SLC38A9, allowing mTORC1 to be activated via inhibition of RHEB. Constitutive activation of this pathway via deletion of PTEN, which converts PIP3 to PIP2, results in proximal tubular hypertrophy during maturation. Uninephrectomy causes an immediate increase in renal blood flow, which enhances renal amino acid content. These amino acids activate mTORC1 by a process requiring class III PI3K (VPS34), which is involved in endocytosis and vesicle recycling from the Golgi to the lysosome. Several recent studies have implicated intracellular membrane trafficking in the process by which some amino acids activate the mTORC1 pathway. mTORC1 is present in the ER and TGN, and the complex appears to traffic to the lysosome via vesicles, as its activation is blocked by loss of RAB1A, known to regulate ER-to-Golgi transport, or ARF, known to mediate budding from the Golgi. Transport to the lysosome likely occurs via a VPS34-mediated pathway. The TGN is slightly acidic (~pH = 6.4, yellow), and as vesicles move to the lysosome (~pH = 4.5–5, dark orange), they become increasingly acidic. It is not clear whether mTORC1 can be activated by amino acids when in the Golgi without prior transport to the lysosome.