All recipients of TN-depleted PBSCs engrafted. The incidence of acute GVHD was not reduced; however, GVHD in these patients was universally corticosteroid responsive. Chronic GVHD was remarkably infrequent (9%; median follow-up 932 days) compared with historical rates of approximately 50% with T cell–replete grafts. TM in the graft resulted in rapid T cell recovery and transfer of protective virus-specific immunity. Excessive rates of infection or relapse did not occur and overall survival was 78% at 2 years.

Depletion of TN from stem cell allografts reduces the incidence of chronic GVHD, while preserving the transfer of functional T cell memory. 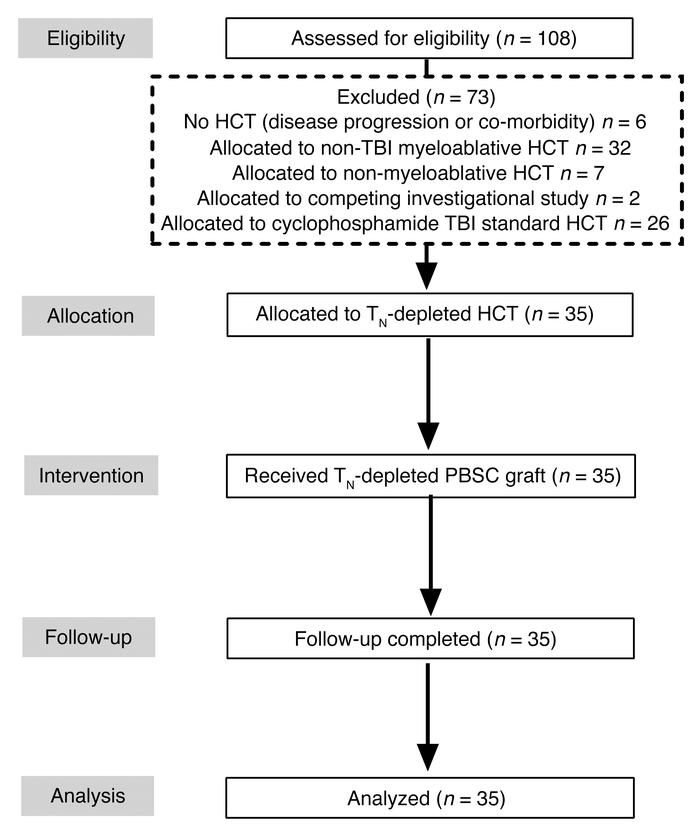 Number of patients assessed for eligibility and excluded or allocated to the trial, treated, followed, and analyzed. Patients with AML, ALL, or MDS could be allocated to nonmyeloablative HCT or to less intensive, non-TBI myeloablative HCT if the attending physician determined that their disease status required less intensive conditioning or if the patient had significant co-morbidities. Patients who were allocated to standard HCT with cyclophosphamide TBI conditioning, rather than the TN depletion trial, included patients who refused consent or lacked insurance coverage to participate in a clinical trial, those who were precluded from participating for logistical reasons, and those who did not meet eligibility criteria.