Infection with Helicobacter pylori (Hp) induces the formation of lymphoid tissue in the stomach and the occasional development of primary gastric B-cell lymphomas. We have studied the expression of 2 chemokines that attract B lymphocytes, BCA-1 and SLC, in gastric tissue samples obtained from patients with chronic gastritis induced by Hp infection or nonsteroidal anti-inflammatory drugs, as well as from patients with Hp-associated low-grade and high-grade gastric lymphomas. High-level expression of BCA-1 and its receptor, CXCR5, was observed in all mucosal lymphoid aggregates and in the mantle zone of all secondary lymphoid follicles in Hp-induced gastric mucosa-associated lymphoid tissue (MALT). Follicular dendritic cells and B lymphocytes are possible sources of BCA-1, which is not expressed by T lymphocytes, macrophages, or CD1a+ dendritic cells. Strong expression of BCA-1 and CXCR5 was also detected in the transformed B cells of gastric MALT lymphomas. By contrast, SLC was confined almost exclusively to endothelial cells in and outside the lymphoid tissue. Only scant, occasional SLC expression was observed in the marginal zone of MALT follicles. Our findings indicate that BCA-1, which functions as a homing chemokine in normal lymphoid tissue, is induced in chronic Hp gastritis and is involved in the formation of lymphoid follicles and gastric lymphomas of the MALT type. 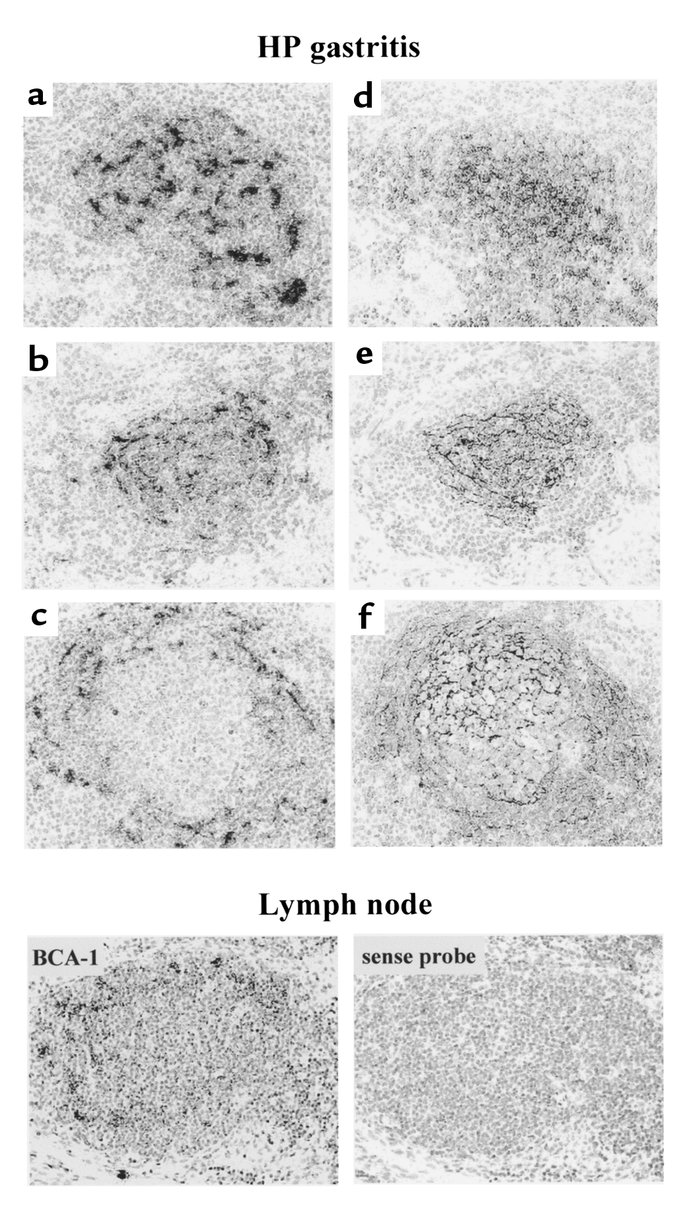 In situ expression of BCA-1 in chronic Hp gastritis. Expression is observed in the whole area of lymphoid aggregates () and is restricted to the mantle zone in secondary lymphoid follicles (). Intermediate distribution () is found occasionally. (–) Localization of follicular dendritic cells as detected in serial sections by immunohistochemical staining for CD21. Bottom: In situ expression of BCA-1 in a secondary follicle of a normal lymph node. Antisense and sense hybridization is shown. ×100 (original magnification).