Calcium in atrial fibrillation — pulling the trigger or not?

Calcium in atrial fibrillation — pulling the trigger or not?

Atrial fibrillation (AF) is the most common sustained arrhythmia disease. Current drug- and surgical-based therapies are ineffective in about 40% to 50% of AF patients; therefore, there is a great need to better understand the underlying mechanisms of this disease and identify potential therapeutic targets. In this issue of the , Greiser and coworkers discovered that atrial remodeling in response to sustained tachycardia silences Ca2+ signaling in isolated rabbit and human atrial myocytes. This Ca2+ release silencing was attributable to a failure of subcellular propagated Ca2+ release due to an increased cytosolic buffering strength. The results from this study challenge the current paradigm that Ca2+ release instability underlies AF. Instead, Ca2+ silencing could be protective against the massive cellular Ca2+ loading that occurs during chronic AF. 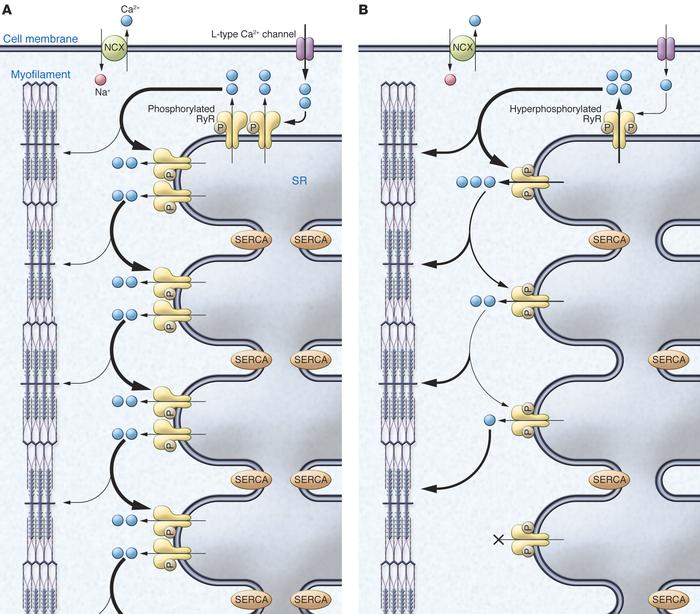 Atrial myocytes rely on Ca2+ diffusion to neighboring RyR2 clusters to activate Ca2+ release from the subsarcolemmal region to the core of the myocytes (). In RAP atrial myocytes, increased Ca2+ binding to myofilaments reduces the free Ca2+ available to activate neighboring RyR2 clusters. This phenomenon, together with the reduction in RyR2 expression and RyR2 cluster size, could explain the failure in centripetal wave propagation (). P, PKA phosphorylation at RyR2-2808; NCX, sodium-calcium exchanger.