Paroxysmal nocturnal hemoglobinuria (PNH) is a disorder of hematopoietic stem cells that has largely been considered a monogenic disorder due to acquisition of mutations in the gene encoding PIGA, which is required for glycosylphosphatidylinositol (GPI) anchor biosynthesis. In this issue of the , Shen et al. discovered that PNH is in fact a complex genetic disorder orchestrated by many genetic alterations in addition to mutations. Some of these mutations predate the acquisition of mutations, while others occur later. Surprisingly, this work indicates that PNH has a clonal evolution and architecture strikingly similar to that of other myeloid neoplasms, highlighting a potentially broader mechanism of disease pathogenesis in this disorder. 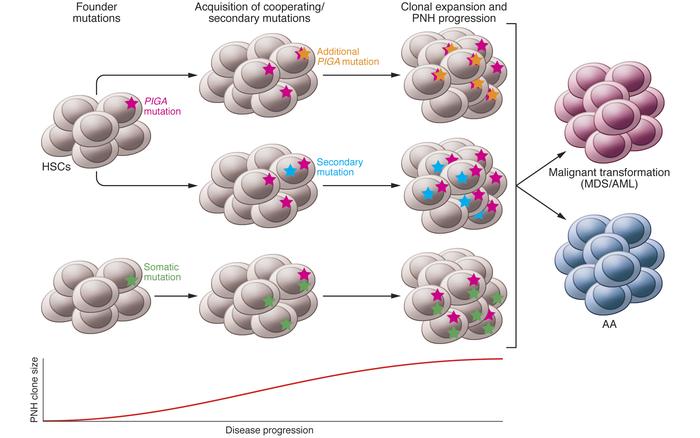 PNH arises from an initial mutation in (orange) or in a different founder gene (green) in HSCs. Over time, the acquisition of additional cooperating lesions, which can include additional mutations in (yellow) or other genes (blue) (e.g., , , , and ), in addition to the founder mutation, adds complexity to the clonal architecture and confers a growth advantage and subsequent progression into overt PNH. On rare occasions, PNH clones can transform into myeloid malignancies such as MDS and acute AML, or into AA. Future work to identify the complement of events responsible for the transformation of PNH into MDS or AML will be enlightening. Moreover, it will be important to determine whether AA harbors a genetic complexity and clonal architecture similar to that of PNH.