Transport of oxygen by red blood cells (rbc) is critical for life and embryogenesis. Here, we determined that provision of the lipid mediator sphingosine 1-phosphate (S1P) to the systemic circulation is an essential function of rbc in embryogenesis. Mice with rbc-specific deletion of sphingosine kinases 1 and 2 ( and ) showed embryonic lethality between E11.5 and E12.5 due to defects in vascular development. Administration of an S1P1 receptor agonist to pregnant dams rescued early embryonic lethality. Even though rbc-specific –KO embryos were anemic, the erythropoietic capacity of hematopoietic stem cells (HSCs) was not impaired, suggesting that rbc can develop in the absence of sphingosine kinase activity. Indeed, transplantation of HSCs deficient for and into adult mice produced rbc that lacked S1P and attenuated plasma S1P levels in recipients. However, in adult animals, both rbc and endothelium contributed to plasma S1P. Together, these findings demonstrate that rbc are essential for embryogenesis by supplying the lysophospholipid S1P, which regulates embryonic vascular development via its receptors. 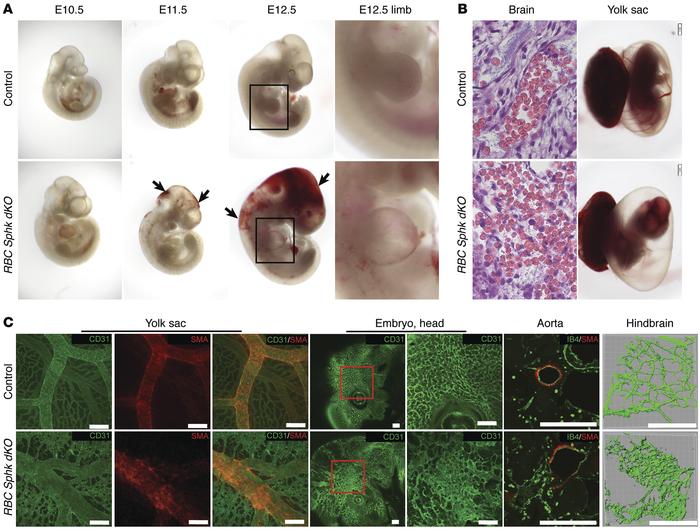