Play down protein to play up metabolism?

Play down protein to play up metabolism?

Who among us hasn’t fantasized about a diet that allows ingestion of a surfeit of calories that are burned off effortlessly by ramping up energy expenditure? In this issue of the , research led by Christopher Morrison suggests that this dream may become a reality; however, a complete understanding of the molecular interface that connects nutrient choices with our cellular metabolism will be required. Laeger et al. show that the expression and secretion of the weight-reducing hormone fibroblast growth factor 21 (FGF21) is regulated by dietary proteins and not, as has been heretofore assumed, simply triggered by reduced caloric intake. This study not only sheds new light on the role of FGF21 in systems metabolism, but also on the ways our bodies cope with the ever-changing availability of different dietary macronutrients. 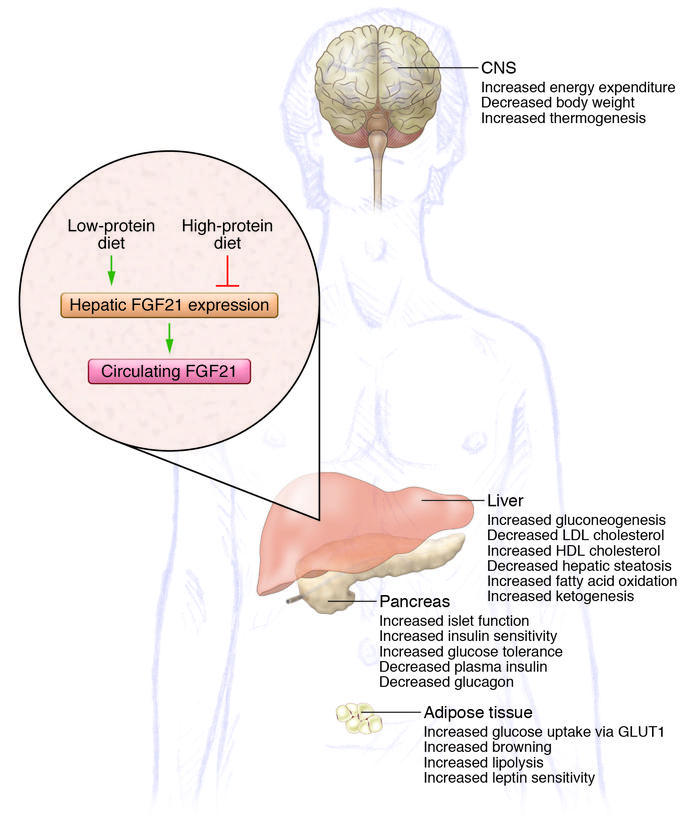 Generation of hepatic FGF21 is induced in response to a LP diet. Once FGF21 enters the circulation, it targets different sites throughout the body, resulting in overall beneficial effects on energy metabolism. In contrast, a high-protein diet blocks hepatic FGF21 production.