Cardiac fibroblasts in pressure overload hypertrophy: the enemy within?

Cardiac fibroblasts in pressure overload hypertrophy: the enemy within?

Cardiac fibroblasts have been long recognized as active participants in heart disease; however, their exact physiological and pathological roles remain elusive, mainly due to the lack of specific markers. In this issue of the , Moore-Morris and colleagues used a fibroblast-specific collagen1a1- reporter to demonstrate that fibroblast accumulation after aortic banding in murine hearts arises almost exclusively from proliferation of resident fibroblasts originating from both the epicardium and a previously unrecognized source, the endocardium. Further characterization of fibroblast origin and function in different types and stages of heart disease could lead to development of improved fibroblast-targeted cardiac therapies. 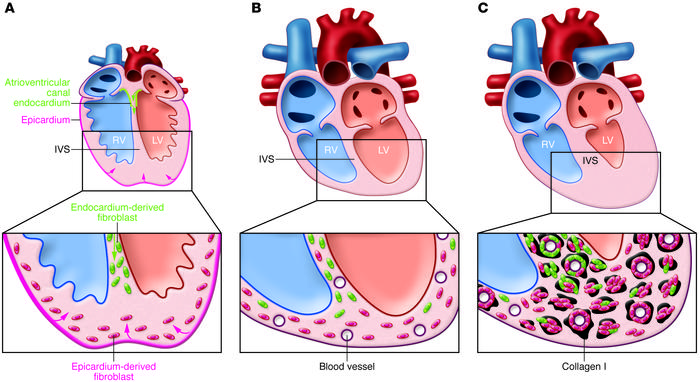 () In the embryonic heart, most fibroblasts are derived from epicardium (pink). The fibroblast lineage described by Moore-Morris et al. is generated from the atrioventricular canal endocardium (green) and migrates down the IVS. () In the adult heart, the dominant fraction of fibroblasts (∼90%) in the RV and LV are of epicardial origin, while 64% of fibroblasts in the IVS derive from the endocardium. () In response to pressure overload, the heart becomes hypertrophic and undergoes fibrosis. In response to pressure overload, both epicardium-derived and endocardium-derived fibroblast lineages proliferate and accumulate in interstitial and perivascular regions along with collagen I (black). The LV undergoes more fibrosis than the RV. Endocardium-derived fibroblasts participate in perivascular fibrosis in the IVS but not in the LV or RV. These two resident lineages account for approximately 95% of fibroblasts in the healthy and pressure-overloaded ventricles.