Vessel-dependent recruitment of sympathetic axons: looking for innervation in all the right places

Vessel-dependent recruitment of sympathetic axons: looking for innervation in all the right places

Autonomic sympathetic axons extend along and innervate resistance arteries to control vascular tone and participate in blood pressure regulation. In this issue of the , Brunet and colleagues reveal that sympathetic innervation of arteries is facilitated by secretion of the axon guidance molecule netrin-1 by arterial VSMCs. Furthermore, disruption of the signaling cascade induced by netrin-1 through its receptor DCC resulted in defective arterial innervation and sympathetic control of vasoconstriction. This comprehensive study represents a major step forward in our understanding of the coordinated wiring of the vascular and nervous systems in various tissues.

Sympathetic innervation of the gut and mesenteric arteries. 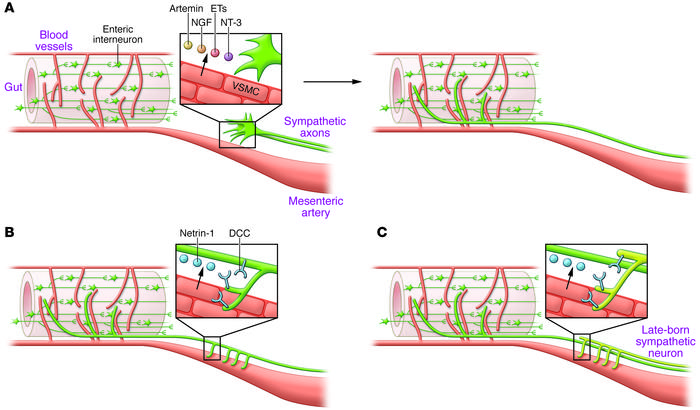