Emerging biology of sphingosine-1-phosphate: its role in pathogenesis and therapy

Emerging biology of sphingosine-1-phosphate: its role in pathogenesis and therapy

Membrane sphingolipids are metabolized to sphingosine-1-phosphate (S1P), a bioactive lipid mediator that regulates many processes in vertebrate development, physiology, and pathology. Once exported out of cells by cell-specific transporters, chaperone-bound S1P is spatially compartmentalized in the circulatory system. Extracellular S1P interacts with five GPCRs that are widely expressed and transduce intracellular signals to regulate cellular behavior, such as migration, adhesion, survival, and proliferation. While many organ systems are affected, S1P signaling is essential for vascular development, neurogenesis, and lymphocyte trafficking. Recently, a pharmacological S1P receptor antagonist has won approval to control autoimmune neuroinflammation in multiple sclerosis. The availability of pharmacological tools as well as mouse genetic models has revealed several physiological actions of S1P and begun to shed light on its pathological roles. The unique mode of signaling of this lysophospholipid mediator is providing novel opportunities for therapeutic intervention, with possibilities to target not only GPCRs but also transporters, metabolic enzymes, and chaperones. 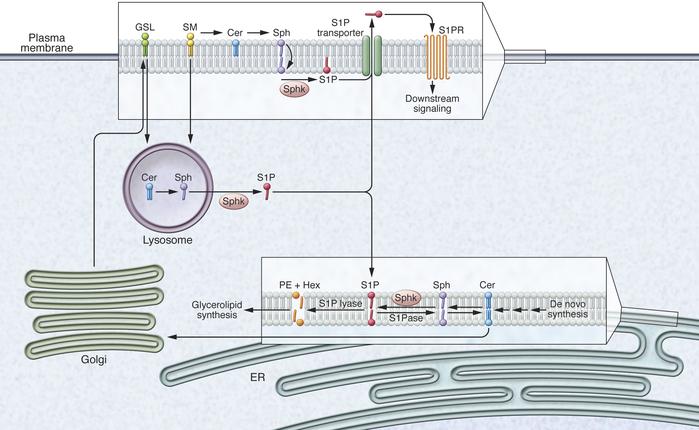 Sphingomyelin (SM) and glycosphingolipids (GSL) are localized to plasma membrane microdomains. Degradation of plasma membrane sphingolipids into ceramide (Cer) and then ultimately to sphingosine (Sph) occurs in lysosomes and at the plasma membrane. Phosphorylation mediated by sphingosine kinases leads to the formation of S1P, which follows one of three pathways: (a) S1P is exported by transporters, such as SPNS2, where it can interact with its GPCRs (S1P1–S1P5) on the cell surface; (b) S1P is degraded by S1P lyase into hexadecenal (Hex) and phosphoethanolamine (PE), which are shunted into the glycerolipid biosynthetic pathway; or (c) S1P is dephosphorylated by S1P phosphatase for recycling of sphingosine into ceramide synthesis. S1PR, S1P receptor; S1Pase, S1P phosphatase.