Genome-wide association studies have identified a link between genetic variation at the human chromosomal locus 1p13.3 and coronary artery disease. The gene encoding sortilin () has been implicated as the causative gene within the locus, as sortilin regulates hepatic lipoprotein metabolism. Here we demonstrated that sortilin also directly affects atherogenesis, independent of its regulatory role in lipoprotein metabolism. In a mouse model of atherosclerosis, deletion of did not alter plasma cholesterol levels, but reduced the development of both early and late atherosclerotic lesions. We determined that sortilin is a high-affinity receptor for the proinflammatory cytokines IL-6 and IFN-γ. Moreover, macrophages and Th1 cells (both of which mediate atherosclerotic plaque formation) lacking sortilin had reduced secretion of IL-6 and IFN-γ, but not of other measured cytokines. Transfer of sortilin-deficient BM into irradiated atherosclerotic mice reduced atherosclerosis and systemic markers of inflammation. Together, these data demonstrate that sortilin influences cytokine secretion and that targeting sortilin in immune cells attenuates inflammation and reduces atherosclerosis. 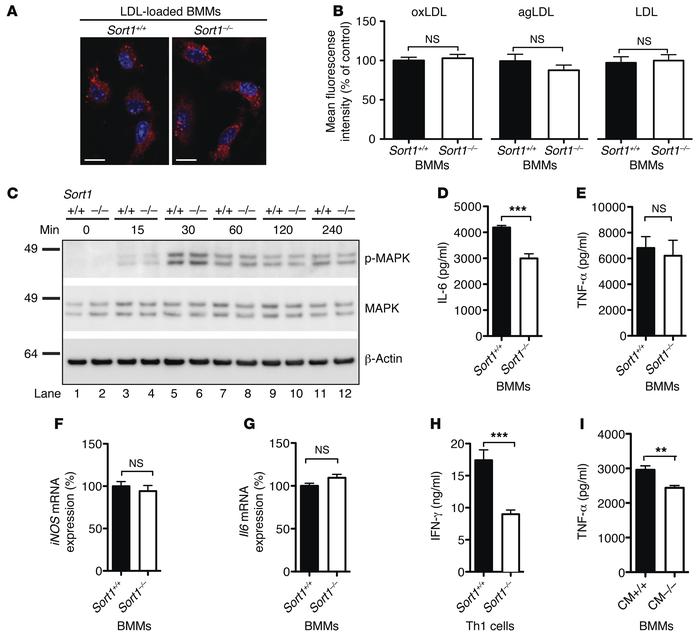 () Fluorescent LDL-loaded BMMs. Scale bars: 10 μm. () BMMs were cultured from ( = 10) and ( = 9) mice and incubated with Atto-633–labeled oxidized (oxLDL), aggregated (agLDL), or native LDL for 20 hours. Foam cell formation was quantified by flow cytometry as mean fluorescence intensity among 10,000 macrophages from each mouse. () Activation of and BMMs, induced by LPS for the indicated times and assessed by phosphorylation of MAPKs, revealed no differences. (–) After 6 hours of LPS stimulation, the amount of IL-6 was significantly reduced in media from versus BMMs (), whereas TNF-α secretion () and () and () mRNA expression were unaffected. ( and ) Culture medium (CM) from activated Th1 cells contained less IFN-γ than did Th1 cells () and was less efficient in priming BMMs to secrete TNF-α after LPS activation (). Representative results from 3 independent experiments (mean ± SEM; = 6–9 per group). ** < 0.01, *** < 0.0001, Student’s test ( and ) or Mann-Whitney test ().