The metastatic spread of tumor epithelial cells accounts for over 90% of cancer-specific mortality; however, the molecular mechanisms that govern tumor spread and distant recolonization remain unclear. In this issue of , Rokavec and colleagues shine light on this murky aspect of tumor biology by focusing through the lens of microenvironmental contributions, namely inflammation, as driving signals that set off a delicate, intracellular feedback loop among cytokine receptors, transcription factors and miRNAs. This study provides in vivo evidence and identifies molecular players behind the elusive switch that drives the epithelial-to-mesenchymal transition and the mesenchymal-to-epithelial transition.

The IL-6/STAT3/miR-34a feedback loop is a molecular switch that controls EMT/MET transition. 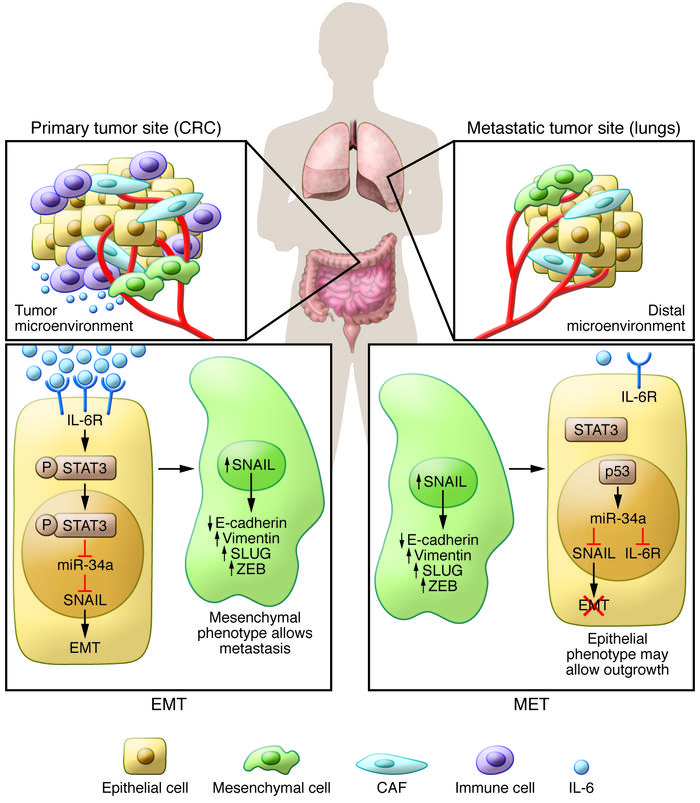 The complex milieu of primary colorectal cancer is mainly characterized by the presence of tumor epithelial cells, cancer-associated fibroblasts (CAF), vasculature, and cells of the immune system that interact and support each other in promoting tumor growth and local invasion. The inflammatory microenvironment, through its major mediator IL-6, triggers the activation of the IL-6R–mediated IL-6/STAT3 pathway, which represses the expression of miR-34a, thus inhibiting the miR-34a–mediated suppression of SNAIL. Therefore, the activation of the loop by IL-6–induced EMT, through its downstream effector SNAIL, shifts the cellular phenotype toward a mesenchymal state that is advantageous for the invasion, intravasation, and extravasation steps of the metastatic cascade. Conversely, the inactivation of this loop at the site of the metastatic colonization (i.e., lungs) aids in switching back to an epithelial state, namely MET, allowing for the outgrowth of metastatic nodules.