The effector activity of antibodies is dependent on engagement with Fcγ receptors (FcγRs) and activation of the associated intracellular signaling pathways. Preclinical evaluation of therapeutic humanized or chimeric mAbs to study the interactions of their Fc regions with FcγRs is hampered by substantial structural and functional FcγR diversity among species. In this report, we used mice expressing only human FcγRs to evaluate the contribution of FcγR-mediated pathways to the neutralizing activity of an anti-anthrax toxin chimeric mAb. We observed that the protective activity of this mAb was highly dependent upon FcγR engagement, with minimal protection against anthrax toxin observed in FcγR-deficient mice following mAb administration. We generated anti-anthrax toxin mAbs with specific Fc domain variants with selectively enhanced affinity for particular human FcγRs and assessed their activity in FcγR-humanized mice. We determined that Fc domain variants that were capable of selectively engaging activating FcγRs substantially enhanced the in vitro and in vivo activity of anthrax toxin-neutralizing antibodies. These findings indicate that the application of Fc domain engineering is a feasible strategy to enhance toxin-neutralizing activity and suggest that engineered antitoxin antibodies will have improved therapeutic efficacy. 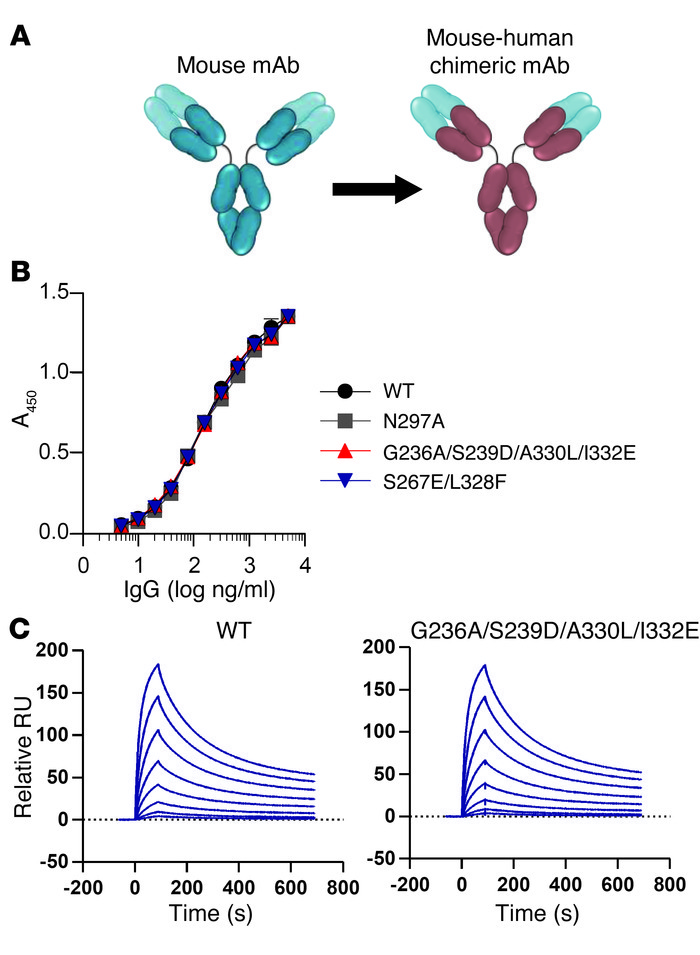 () Representation of the mouse-human chimeric anti-PA (19D9) mAb. The constant regions of the heavy (CH1-3) and light chain (Cκ) of mouse IgG1, κ (parental mAb) were replaced with those of hIgG1 and Cκ, respectively. Recombinant 19D9 hIgG1 wild-type and Fc domain variants were generated. No difference in their affinity and specificity for PA was evident among the various Fc domain variants, as assessed by () ELISA and () surface plasmon resonance (affinity values are shown in Supplemental Table 2).