It is increasingly evident that cancer results from altered organ homeostasis rather than from deregulated control of single cells or groups of cells. This applies especially to epithelial cancer, the most common form of human solid tumors and a major cause of cancer lethality. In the vast majority of cases, in situ epithelial cancer lesions do not progress into malignancy, even if they harbor many of the genetic changes found in invasive and metastatic tumors. While changes in tumor stroma are frequently viewed as secondary to changes in the epithelium, recent evidence indicates that they can play a primary role in both cancer progression and initiation. These processes may explain the phenomenon of field cancerization, i.e., the occurrence of multifocal and recurrent epithelial tumors that are preceded by and associated with widespread changes of surrounding tissue or organ “fields.” 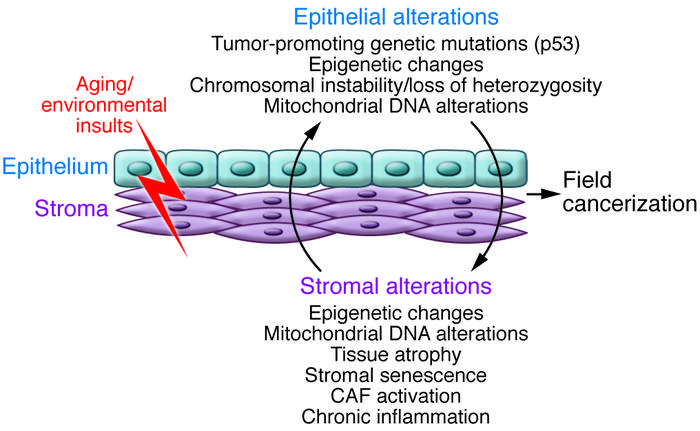 Aging and environmental insults, such as UV irradiation or smoke, can target both epithelial and stromal compartments of organs, leading to stable genetic and epigenetic changes. Cross-talk between these two compartments can induce further pro-oncogenic alterations, such as secretion of growth factors and proteases, alterations in the extracellular matrix, and recruitment of inflammatory cells. These spreading alterations in both the epithelium and stroma are a phenomenon known as field cancerization.