Therapeutic drugs with ototoxic side effects cause significant hearing loss for thousands of patients annually. Two major classes of ototoxic drugs are cisplatin and the aminoglycoside antibiotics, both of which are toxic to mechanosensory hair cells, the receptor cells of the inner ear. A critical need exists for therapies that protect the inner ear without inhibiting the therapeutic efficacy of these drugs. The induction of heat shock proteins (HSPs) inhibits both aminoglycoside- and cisplatin-induced hair cell death and hearing loss. We hypothesized that exposure to sound that is titrated to stress the inner ear without causing permanent damage would induce HSPs in the cochlea and inhibit ototoxic drug–induced hearing loss. We developed a sound exposure protocol that induces HSPs without causing permanent hearing loss. We used this protocol in conjunction with a newly developed mouse model of cisplatin ototoxicity and found that preconditioning mouse inner ears with sound has a robust protective effect against cisplatin-induced hearing loss and hair cell death. Sound therapy also provided protection against aminoglycoside-induced hearing loss. These data indicate that sound preconditioning protects against both classes of ototoxic drugs, and they suggest that sound therapy holds promise for preventing hearing loss in patients receiving these drugs. 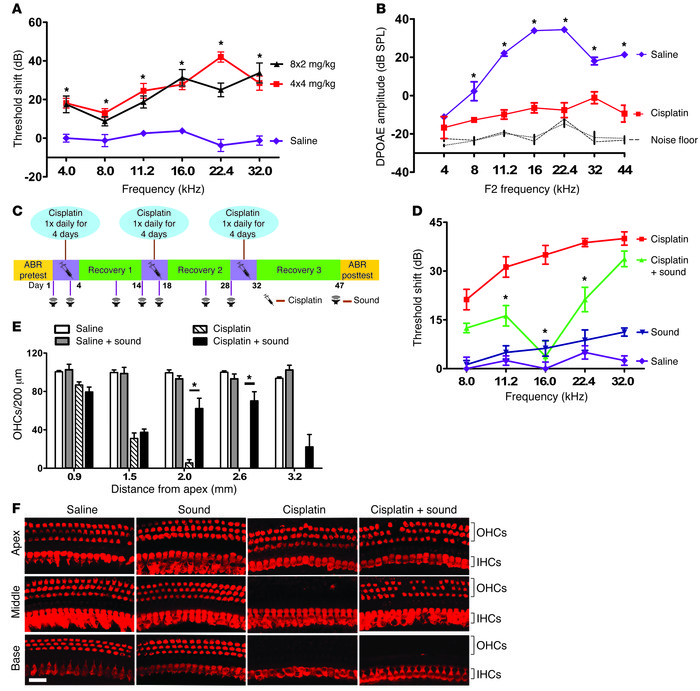