In a report reading like a fascinating detective story, Vincent and colleagues crack the mysterious case of east Texas bleeding disorder. They show that affected individuals have a mutation in exon 13 of the coagulation gene that causes increased expression of an alternatively spliced transcript, which encodes a previously unrecognized factor V (FV) isoform they call FV-short. This FV isoform lacks a large portion of the B domain of FV, which is normally released upon the proteolytic activation of FV by thrombin and binds tightly to the coagulation regulator tissue factor pathway inhibitor-α (TFPIα). This interaction leads to an approximately 10-fold increase in the level of TFPIα circulating in plasma and a resultant anticoagulant effect that produces a hemorrhagic diathesis.

Forms of factor V and alignment of the sequences of the B domain BR and TFPIα. 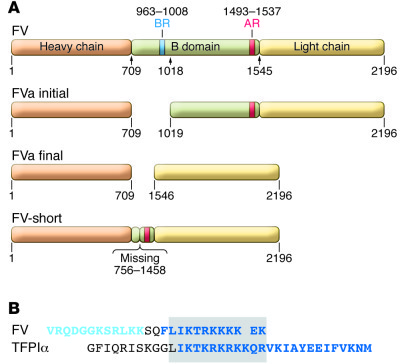 () Structure of FV. FV: the heavy chain (orange), light chain (yellow) and B domain (green) are shown. The BR (blue) and AR (red) of the B domain are depicted as well as the sites of cleavage produced by FXa and thrombin during the activation of FV. FVa initial: initial cleavage of FV by FXa and thrombin occurs at R709 and R1018. FVa final: cleavage at R1545 is produced by thrombin, but slowly or not at all by FXa, producing the heavy chain and light chains of FVa that associate in a calcium ion–dependent fashion. FV-short: lacks residues 756–1458 of the FV B domain, but contains the AR. () Alignment of B domain and TFPIα sequences. Two sequences within the BR domain of the FV B domain found to be involved in its presumed interaction with AR are shown: peptide 983–994 (light blue lettering) and peptide 997–1008 (dark blue lettering), with the latter appearing to be much more important (). The sequence of TFPIα required for its interaction with FV is shown in dark blue lettering (). Boxed is a region of substantial homology.