Serotonin (5-hydroxytryptamine, or 5-HT) receptors mediate a plethora of physiological phenomena in the brain and the periphery. Additionally, serotonergic dysfunction has been implicated in nearly every neuropsychiatric disorder. The effects of serotonin are mediated by fourteen GPCRs. Both the therapeutic actions and side effects of commonly prescribed drugs are frequently due to nonspecific actions on various 5-HT receptor subtypes. For more than 20 years, the search for clinically efficacious drugs that selectively target 5-HT receptor subtypes has been only occasionally successful. This review provides an overview of 5-HT receptor pharmacology and discusses two recent 5-HT receptor subtype–selective drugs, lorcaserin and pimavanserin, which target the 5HT2C and 5HT2A receptors and provide new treatments for obesity and Parkinson’s disease psychosis, respectively.

Sites of action of 5-HT therapeutics. 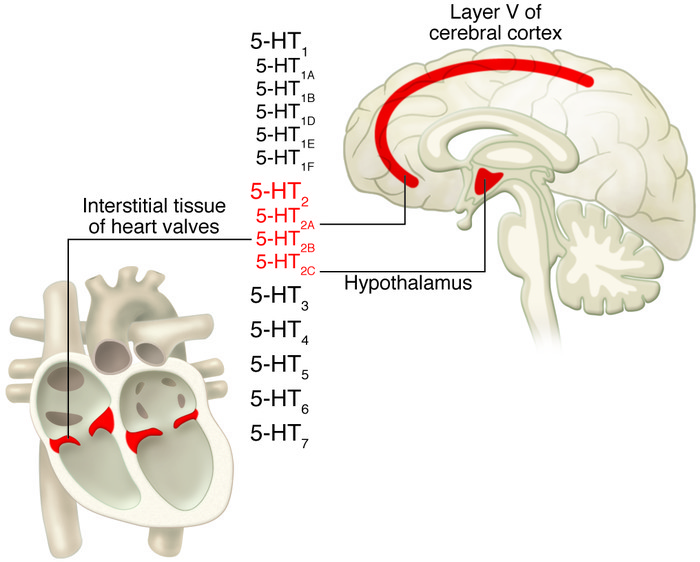 Shown in the middle is a table listing the major families of 5-HT receptors (viz. 5-HT1 to 5-HT7). As shown, the 5-HT1 family has five members (5-HT1A, 5-HT1B, 5-HT1D, 5-HT1E, and 5-HT1F), while the 5-HT2 family — the topic of this review — has three: 5-HT2A, 5-HT2B, and 5-HT2C. Each member of the 5-HT2 family displays distinct brain and tissue distributions. The 5-HT2A receptor is enriched in pyramidal neurons in layer V of the cerebral cortex, where it mediates the actions of pimavanserin and other atypical antipsychotic drugs. The 5-HT2B receptor is enriched in interstitial cells of the heart valves, where it mediates the valvulopathic actions of certain drugs like fenfluramine. The 5-HT2C receptor is enriched in the hypothalamus, among other areas, particularly in nuclei engaged in regulating feeding behavior, where it mediates the actions of the appetite suppressant lorcaserin.