Conjugation of a brain-penetrant peptide with neurotensin provides antinociceptive properties

Conjugation of a brain-penetrant peptide with neurotensin provides antinociceptive properties

Neurotensin (NT) has emerged as an important modulator of nociceptive transmission and exerts its biological effects through interactions with 2 distinct GPCRs, NTS1 and NTS2. NT provides strong analgesia when administered directly into the brain; however, the blood-brain barrier (BBB) is a major obstacle for effective delivery of potential analgesics to the brain. To overcome this challenge, we synthesized chemical conjugates that are transported across the BBB via receptor-mediated transcytosis using the brain-penetrant peptide Angiopep-2 (An2), which targets LDL receptor–related protein-1 (LRP1). Using in situ brain perfusion in mice, we found that the compound ANG2002, a conjugate of An2 and NT, was transported at least 10 times more efficiently across the BBB than native NT. In vitro, ANG2002 bound NTS1 and NTS2 receptors and maintained NT-associated biological activity. In rats, i.v. ANG2002 induced a dose-dependent analgesia in the formalin model of persistent pain. At a dose of 0.05 mg/kg, ANG2002 effectively reversed pain behaviors induced by the development of neuropathic and bone cancer pain in animal models. The analgesic properties of ANG2002 demonstrated in this study suggest that this compound is effective for clinical management of persistent and chronic pain and establish the benefits of this technology for the development of neurotherapeutics.

Synthesis and purification of ANG2002. 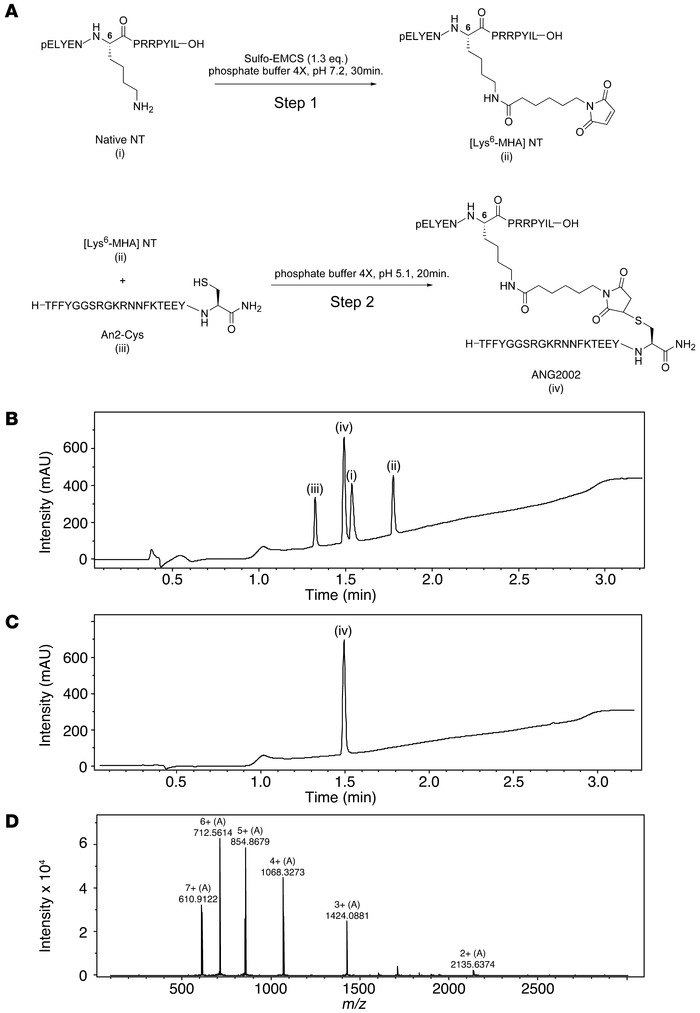 () A sulfo-N-[ε-maleimidocaproyloxy]succinimide ester (sulfo-EMCS) linker was attached to the lysine in position 6 of NT and to the C-terminally modified cysteine of An2 to maintain separation of both moieties for functionality purposes. In step 1, 1.3 equivalents of sulfo-EMCS were added to NT. Within 30 minutes, the reaction was acidified and the [Lys6-MHA]-NT intermediate purified by HPLC. In step 2, 1.3 equivalents of An2-cysteine were added to the reaction at RT. () Different retention times were found by analytical RP-UPLC for (i) NT, (ii) [Lys6-MHA] NT, (iii) An2-Cys, and (iv) ANG2002. () Analytical RP-UPLC profile of the purified ANG2002 after the 2-step conjugation reaction. () Multicharged ESI-TOF MS spectrum of purified ANG2002.