The liver, a major site of body iron stores, mediates key responses that preserve systemic iron homeostasis. In this issue of the , Guo et al. demonstrate that administration of antisense oligonucleotides that reduce expression of Tmprss6, a hepatic protein that plays an essential role in maintaining iron balance, can attenuate disease severity in mouse models of human iron overload disorders. These data reveal the potential of novel TMPRSS6-targeted therapies for the treatment of clinical conditions such as hereditary hemochromatosis and β-thalassemia.

Effect of -ASO on the regulation of hepcidin expression in hepatocytes. 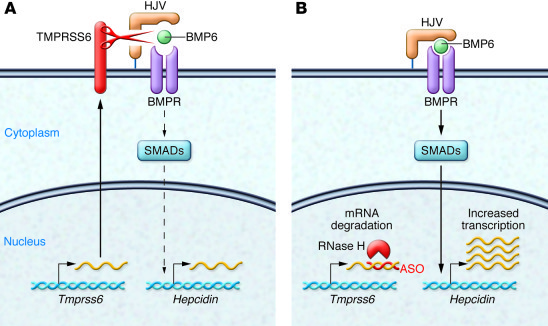 () Shown in a schematized hepatocyte is the pathway that TMPRSS6 modulates to dampen hepcidin expression. Binding of the BMP6 ligand to BMP receptors (BMPRs) at the plasma membrane activates SMAD proteins, which translocate to the nucleus to activate hepcidin transcription. The membrane-associated protein HJV, which functions as a BMP coreceptor, augments hepcidin signaling through this pathway. TMPRSS6 dampens hepcidin signaling by cleaving HJV from the cell membrane. When liver iron stores increase, BMP6 production by the liver is also increased, thereby inducing hepcidin synthesis. () In the presence of -ASOs, mRNA is degraded by RNase H. The resulting reduction in TMPRSS6 protein leads to enhanced BMP signaling for hepcidin transcription. For simplicity, other hepcidin-modulating pathways, as well as other proteins that interact with the BMP pathway, are not shown.