The use of induced pluripotent stem cells (iPSCs) has been postulated to be the most effective strategy for developing patient-specific respiratory epithelial cells, which may be valuable for lung-related cell therapy and lung tissue engineering. We generated a relatively homogeneous population of alveolar epithelial type II (AETII) and type I (AETI) cells from human iPSCs that had phenotypic properties similar to those of mature human AETII and AETI cells. We used these cells to explore whether lung tissue can be regenerated in vitro. Consistent with an AETII phenotype, we found that up to 97% of cells were positive for surfactant protein C, 95% for mucin-1, 93% for surfactant protein B, and 89% for the epithelial marker CD54. Additionally, exposing induced AETII to a Wnt/β-catenin inhibitor (IWR-1) changed the iPSC-AETII–like phenotype to a predominantly AETI-like phenotype. We found that of induced AET1 cells, more than 90% were positive for type I markers, T1α, and caveolin-1. Acellular lung matrices were prepared from whole rat or human adult lungs treated with decellularization reagents, followed by seeding these matrices with alveolar cells derived from human iPSCs. Under appropriate culture conditions, these progenitor cells adhered to and proliferated within the 3D lung tissue scaffold and displayed markers of differentiated pulmonary epithelium. 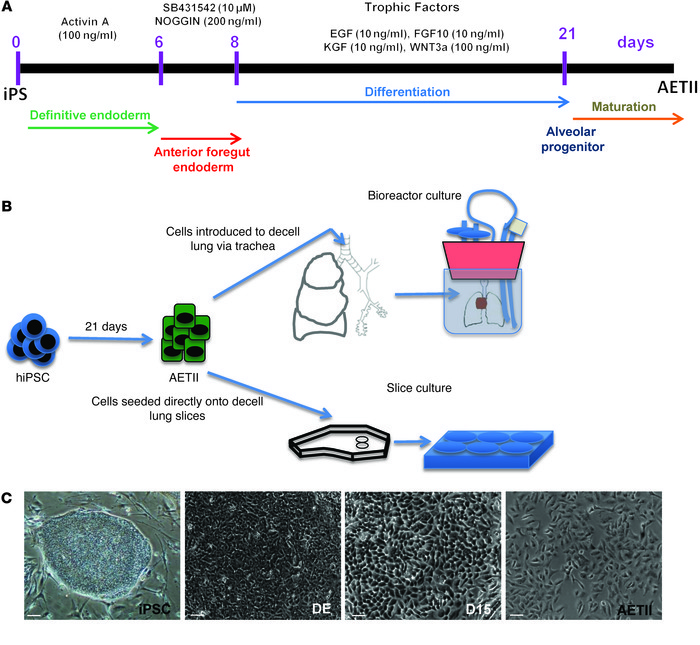 () Schematic protocol for directed differentiation of iPSCs to AETII in vitro in 22 days. Cytokines were added at different steps indicated on top of panel. () Schematic summarizing the iPSC differentiation and decellularization-recellularization of both rat and human lung with iPSC-derived AETII cells. decell, decellularized. () Phase-contrast images of iPSCs at day 0, DE cells at day 6, and differentiated cells at day 15 and 22, which are termed AETII cells. Scale bars: 63 μm.