Matrix metalloproteinases in angiogenesis: a moving target for therapeutic intervention

Matrix metalloproteinases in angiogenesis: a moving target for therapeutic intervention 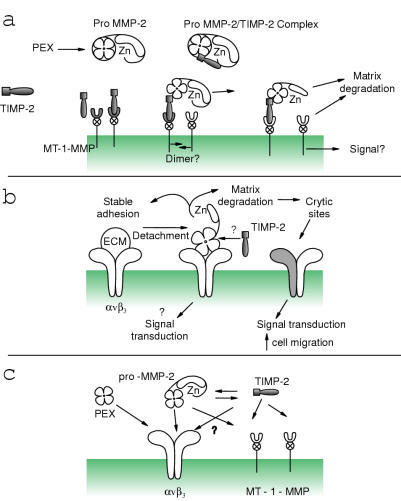 () MT-1-MMP activation of pro-MMP-2. As described in the text, TIMP-2 binding to the active site of MT-1-MMP and the PEX domain of pro-MMP-2 results in formation of a ternary complex. If this occurs in proximity to a second MT-1-MMP molecule, proteolytic modification of the pro-fragment of MMP-2 initiates activation of this protease. The activated protease may then dissociate from the cell surface and contribute to degradation of the extracellular matrix prerequisite for endothelial sprout invasion. In this mechanism TIMP-2 levels are critical for determining the level of pro-MMP-2 activation. TIMP-2 levels must be significantly lower than the local MT-1-MMP concentration to allow activation of MMP-2. TIMP-2 saturation of MT-1-MMP binding sites inhibits pro-MMP-2 activation via this MT-1-MMP mechanism. It is not known how free MT-1-MMP can recognize the pro-MMP-2-TIMP-2-MT-1-MMP ternary complex and initiate activation. It is not known if MT-1-MMP forms a noncovalent homo-dimer, or other complex, that may facilitate pro-MMP-2 activation. () Binding of MMP-2 to αvβ3 integrin receptor. As described in the text, MMP-2 forms a stable complex with αvβ3. This binding is mediated by the C-terminal PEX domain of MMP-2. Binding of recombinant PEX domain competes for binding of MMP-2 and inhibits angiogenesis. The mechanism of this inhibition is not known, but these findings suggest that MMP-2 activity may be required for endothelial cell detachment from stable matrix interactions. Moreover, the role of TIMP-2 in modulating the interaction of MMP-2 with αvβ3 is not known. It is possible that formation of the MMP-2-TIMP-2, which is mediated by interaction of TIMP-2 with the MMP PEX domain, may compete for binding of the protease to αvβ3. Finally, the effects of MMP-2 binding to αvβ3 on signal transduction from this receptor are not known, nor are downstream consequences of possible changes in signaling events. () Interaction of MT-1-MMP and αvβ3 with MMP-2 and TIMP-2 on the cell surface. As described in and , there are at least two independent mechanisms for localization of MMP-2 on endothelial cell surface. Possible interactions between these two mechanism are illustrated as discussed in the text.