Chronic granulomatous disease (CGD) patients have recurrent life-threatening bacterial and fungal infections. Olfactomedin 4 (OLFM4) is a neutrophil granule protein that negatively regulates host defense against bacterial infection. The goal of this study was to evaluate the impact of deletion on host defense against and in a murine X-linked -deficiency CGD model. We found that intracellular killing and in vivo clearance of . , as well as resistance to . sepsis, were significantly increased in and double-deficient mice compared with CGD mice. The activities of cathepsin C and its downstream proteases (neutrophil elastase and cathepsin G) and serum levels of IL-1β, IL-6, IL-12p40, CXCL2, G-CSF, and GM-CSF in -deficient as well as and double-deficient mice were significantly higher than those in WT and CGD mice after challenge with . . We did not observe enhanced defense against . in -deficient mice using a lung infection model. These results show that deletion can successfully enhance immune defense against . , but not . , in CGD mice. These data suggest that OLFM4 may be an important target in CGD patients for the augmentation of host defense against bacterial infection.

Intracellular killing and in vivo peritoneal clearance of . in - and -deficient mice. 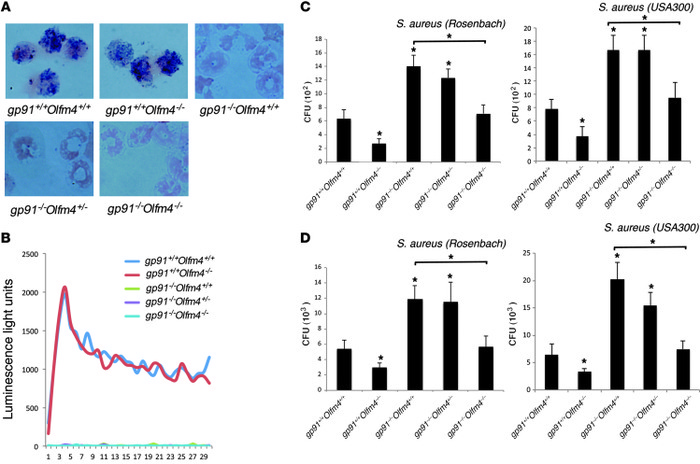