The brain and spinal cord are surrounded by cerebrospinal fluid, which provides a mechanically stable environment for these delicate structures against the forces of gravity and sudden acceleration and deceleration. Neurons and glia comprising the parenchyma of the brain are enveloped in their microenvironment by interstitial fluid. Interstitial fluid has long been considered to be unaffected by the production and flow of cerebrospinal fluid outside the brain parenchyma. However, two recent papers by Iliff et al. demonstrate that cerebrospinal fluid enters the deep substance of the brain, mixes with the interstitial fluid surrounding neurons and glia, and plays an important role in the exchange and clearance of molecules in the interstitial space of the central nervous system.

CSF and its traffic to the lymphatic system. 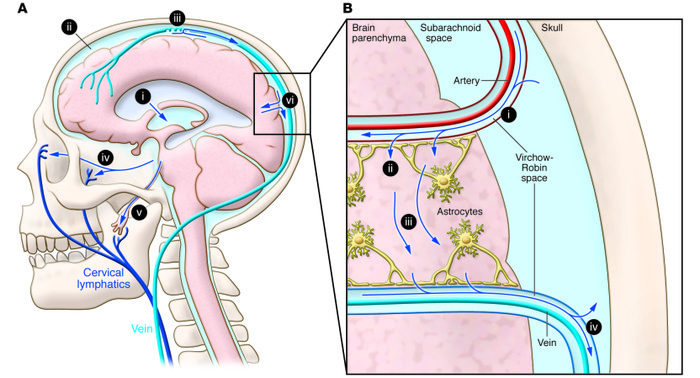 () Formation and major egress pathways of CSF. CSF is produced primarily at the choroid plexus of the lateral ventricles (i) and transits through the ventricles of the brain to eventually enter the subarachnoid space surrounding the brain and spinal cord (ii). The primary route of egress of CSF occurs at the arachnoid granulations of large draining veins (iii). CSF also drains into the cervical lymphatic system through the cribriform plate (iv) and through nerve sheaths (v). CSF enters the interstitial fluid compartment in brain parenchyma via the paravascular pathway (vi). This figure was published in: Sakka L, Coll G, Chazal J. Anatomy and physiology of cerebrospinal fluid. 2011;128(6):309:316. Copyright © 2013 Elsevier Masson SAS. All rights reserved (). () The paravascular system. CSF enters brain parenchyma along the Virchow-Robin space surrounding large penetrating arteries (i). CSF then transits around, or through, the end feet of astrocytes that largely surround the microvasculature (ii). CSF then mixes with and transports interstitial fluid (iii), which then enters the Virchow-Robin space surrounding exiting veins and reenters the subarachnoid space or drains to cervical lymphatics (iv). Modified with permission from ().