Steroids and osteoporosis: the quest for mechanisms

Steroids and osteoporosis: the quest for mechanisms

Advances made during the last 35 years have improved our understanding of the mechanisms of steroid hormone action on bone and how physiologic, pathologic, or iatrogenic changes in hormone levels can lead to increased fracture risk. Estrogens, androgens, and glucocorticoids alter the cellular composition of bone by regulating the supply and lifespan of osteoclasts and osteoblasts. Additionally, they influence the survival of osteocytes, long-lived cells that are entombed within the mineralized matrix and mediate the homeostatic adaptation of bone to mechanical forces. Altered redox balance is a proximal underlying mechanism of some of these effects, and sex steroid deficiency or glucocorticoid excess contributes to the aging of the skeleton.

Steroid hormones influence the birth and death of bone cells. 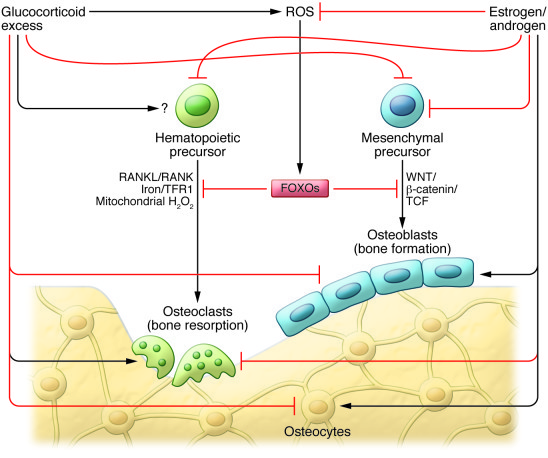 Osteoclasts and osteoblasts are derived from hematopoietic and mesenchymal precursors, respectively. Osteoclast generation, function, and survival require RANKL signaling via its receptor, RANK, as well as mitochondrial biogenesis coupled with iron uptake through transferrin receptor 1 (TFR1) and iron supply to mitochondrial respiratory proteins; both cascades lead to increased H2O2 generation, which promotes osteoclastogenesis. Osteoblast generation is critically dependent on WNT/β-catenin/TCF signaling. ROS, which are primarily generated by the mitochondrial respiratory chain, activate FOXO transcription factors that suppress H2O2 production and decrease osteoclastogenesis. ROS also decrease the proliferation/differentiation of committed osteoblast precursors, by a diversion of β-catenin from WNT/β-catenin/TCF– to FOXO-mediated transcription. During the process of bone remodeling, bone matrix excavated by osteoclasts is replaced with new matrix produced by osteoblasts. Glucocorticoids (at supraphysiologic levels) and estrogens or androgens influence the generation and lifespan of osteoclasts and osteoblasts and the lifespan of osteocytes, at least in part, by altering redox balance. Black and red lines pointing to mature osteoclasts and osteoblasts on the bone surface and osteocytes embedded in the matrix indicate prolongation and shortening effects, respectively, on lifespan.