The glymphatic system is a recently defined brain-wide paravascular pathway for cerebrospinal fluid (CSF) and interstitial fluid (ISF) exchange that facilitates efficient clearance of solutes and waste from the brain. CSF enters the brain along para-arterial channels to exchange with ISF, which is in turn cleared from the brain along para-venous pathways. Because soluble amyloid β clearance depends on glymphatic pathway function, we proposed that failure of this clearance system contributes to amyloid plaque deposition and Alzheimer’s disease progression. Here we provide proof of concept that glymphatic pathway function can be measured using a clinically relevant imaging technique. Dynamic contrast-enhanced MRI was used to visualize CSF-ISF exchange across the rat brain following intrathecal paramagnetic contrast agent administration. Key features of glymphatic pathway function were confirmed, including visualization of para-arterial CSF influx and molecular size-dependent CSF-ISF exchange. Whole-brain imaging allowed the identification of two key influx nodes at the pituitary and pineal gland recesses, while dynamic MRI permitted the definition of simple kinetic parameters to characterize glymphatic CSF-ISF exchange and solute clearance from the brain. We propose that this MRI approach may provide the basis for a wholly new strategy to evaluate Alzheimer’s disease susceptibility and progression in the live human brain.

Cluster-based spatial distribution of Gd-DTPA and GadoSpin in the rat brain. 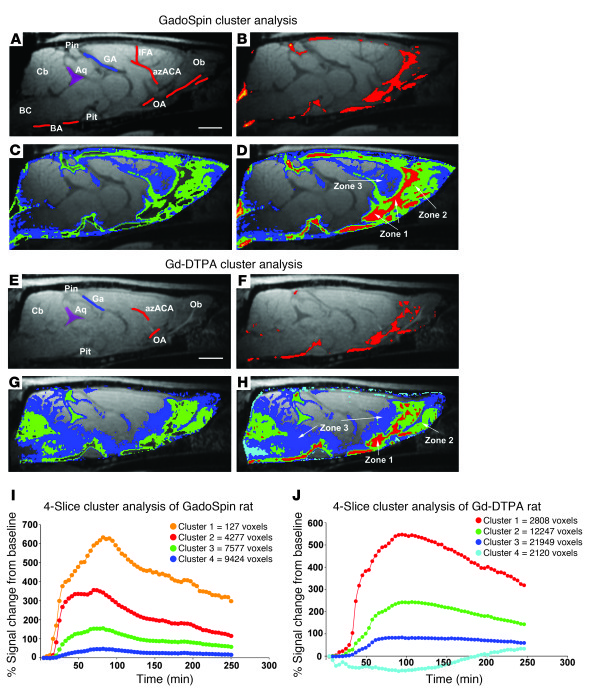 () T1-weighted sagittal midline section at the level of the aqueduct (Aq), with anatomical landmarks displayed prior to administration of GadoSpin. BA, basal artery; BC, basal cistern; Cb, cerebellum; GA, vein of Galen; Ob, olfactory bulb; Pin, pineal gland; Pit, pituitary gland. () Cluster analysis in GadoSpin rat. The paravascular cluster is overlaid on the corresponding MRI, demonstrating that the red and orange clusters match the spatial location of the basal cistern, pineal recess and pituitary recess, and tissue in the immediate vicinity of the major arteries. () Distribution of blue and green clusters from the same GadoSpin rat, demonstrating the more parenchymal location of these clusters. () All clusters displayed simultaneously and overlaid on the MRI. The red and orange clusters in the paravascular conduits are classified as zone 1, the green cluster is classified as zone 2, and the blue cluster is classified as zone 3. () T1-weighted MRI at the level of the aqueduct, with anatomical landmarks displayed from a rat prior to administration of Gd-DTPA. () Paravascular, zone 1 cluster displayed from the Gd-DTPA rat. () Green and blue cluster distribution in the Gd-DTPA rat. () All 4 clusters displayed. The red, green, and blue clusters are classified as zone 1, 2, and 3, respectively. Scale bar: 3 mm. The TACs for each of the 4 clusters for () a GadoSpin rat and () a Gd-DTPA rat are displayed in addition to the total number of voxels of each the clusters.