The glymphatic system is a recently defined brain-wide paravascular pathway for cerebrospinal fluid (CSF) and interstitial fluid (ISF) exchange that facilitates efficient clearance of solutes and waste from the brain. CSF enters the brain along para-arterial channels to exchange with ISF, which is in turn cleared from the brain along para-venous pathways. Because soluble amyloid β clearance depends on glymphatic pathway function, we proposed that failure of this clearance system contributes to amyloid plaque deposition and Alzheimer’s disease progression. Here we provide proof of concept that glymphatic pathway function can be measured using a clinically relevant imaging technique. Dynamic contrast-enhanced MRI was used to visualize CSF-ISF exchange across the rat brain following intrathecal paramagnetic contrast agent administration. Key features of glymphatic pathway function were confirmed, including visualization of para-arterial CSF influx and molecular size-dependent CSF-ISF exchange. Whole-brain imaging allowed the identification of two key influx nodes at the pituitary and pineal gland recesses, while dynamic MRI permitted the definition of simple kinetic parameters to characterize glymphatic CSF-ISF exchange and solute clearance from the brain. We propose that this MRI approach may provide the basis for a wholly new strategy to evaluate Alzheimer’s disease susceptibility and progression in the live human brain. 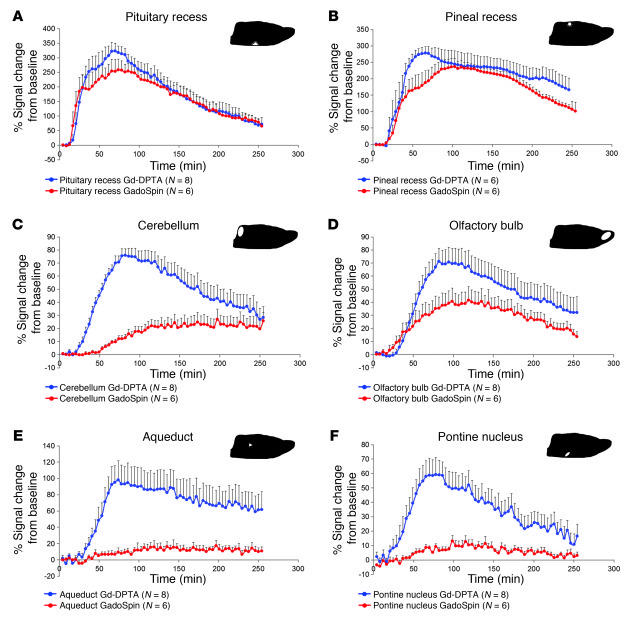 The average TACs for Gd-DTPA (blue circles) and GadoSpin (red circles) are shown for the () pituitary recess, () pineal recess, () cerebellum, () olfactory bulb, () aqueduct, and () pontine nucleus. The location of each of the ROIs is shown on the sagittal brain icon displayed in the top right corner of each of the graphs. ( and ) It is evident that contrast uptake in the pituitary recess and pineal recess is largely similar for Gd-DTPA and GadoSpin. This confirms that within the proximal portions of the glymphatic pathway, paramagnetic contrast agent transport is largely independent of molecular size. It is also clear that tissue uptake of Gd-DTPA is markedly higher than that observed for GadoSpin in the () cerebellum, () aqueduct, and () pontine nucleus. This confirms that the movement of contrast agent from the subarachnoid/proximal paravascular pathway into and through the brain interstitium is indeed dependent upon molecular size. Data are presented as mean ± SEM.