Collagenases and cracks in the plaque

Collagenases and cracks in the plaque

The core of an atheromatous plaque contains lipids, macrophages, and cellular debris, typically covered by a fibrous cap that separates the thrombogenic core from the blood. Rupture of the fibrous cap causes most fatal myocardial infarctions. Interstitial collagen confers tensile strength on the cap, as it does in skin and tendons. In 1994, Peter Libby and colleagues demonstrated overexpression of collagenolytic enzymes in atheromatous plaques and implicated MMPs in the destabilization of these lesions.

Regulation of collagen metabolism and the thrombotic complications of atherosclerosis. 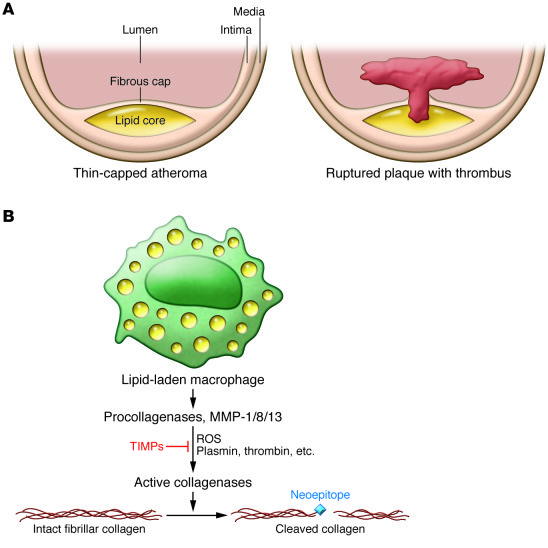 () A cross section of an artery containing a thin-capped atheroma with low collagen content due to decreased synthesis and increased breakdown of collagen is shown. A thin and weakened fibrous cap overlies a lipid-rich core in the center of the plaque (left). A plaque in which the fibrous cap has ruptured, exposing the blood coagulation components to thrombogenic material in the lipid core, triggering thrombosis, is also shown (right). () Lipid-laden macrophages in atherosclerotic plaques express MMPs. Various extracellular stimuli, including reactive oxygen species, plasmin, and thrombin, contribute to enzymatic activation of these enzymes that is required for their proteolytic activity. Macrophages in human plaques overexpress the three known MMP interstitial collagenases, MMP-1, MMP-8, and MMP-13. The endogenous inhibitors of this family of enzymes, the tissue inhibitors of MMPs (TIMPs), do not change markedly between unaffected and atherosclerotic arteries. The MMP interstitial collagenases catalyze the initial proteolytic cleavage of intact triple helical fibrillar collagen.