Early demonstrations that mice could be tolerized to transplanted tissues with short courses of immunosuppressive therapy and that with regard to tolerance to self, CD4+FOXP3+ regulatory T cells (Tregs) appeared to play a critical role, have catalyzed strategies to harness FOXP3-dependent processes to control rejection in human transplantation. This review seeks to examine the scientific underpinning for this new approach to finesse immunosuppression.

Therapeutic intervention aimed at inducing transplantation tolerance can be thought of in three stages. 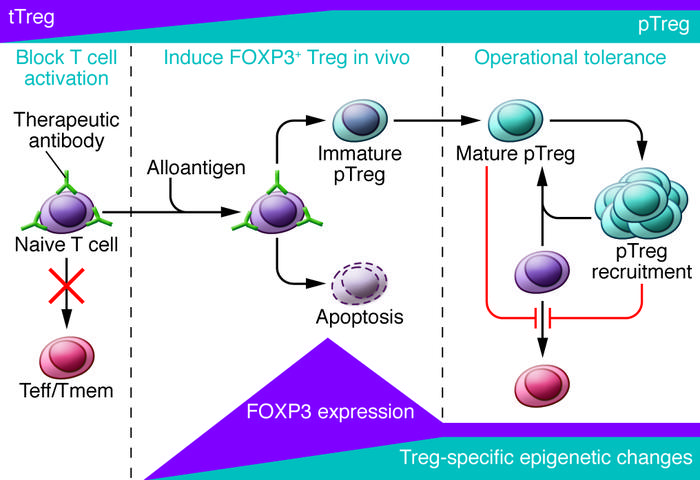 The first (left) is concerned with creating a ceasefire, in which inflammation and danger signals are minimized. In the example given, short-term inhibition of T cell activation is achieved with antibodies that block T cell coreceptors and costimulatory molecules such as CD4, CD8, and CD40L. Under these nondepleting conditions, in the second stage (middle), both self-reactive and alloreactive FOXP3+ natural Tregs (tTreg) are recruited and expanded. Alloantigen would also induce anergy and apoptosis of some naive T cells and induce others to express FOXP3. A proportion of these FOXP3-expressing cells will continue differentiation toward mature pTregs with a well-established Treg-specific epigenome. Meanwhile, even those T cells transiently expressing FOXP3 will be restrained from participation in the inflammatory (rejection) process (, –). As the therapeutic agents clear from the system, the favorable balance of regulation (based on expanded antigen-specific tTregs and pTregs) creates the third stage of “operational tolerance” (right). Tregs maintain that operational tolerance as a result of continued exposure to the engrafted donor antigens and recruitment of new pTregs by “infectious tolerance” ().